Should we take exogenous ketones during a long-distance triathlon? 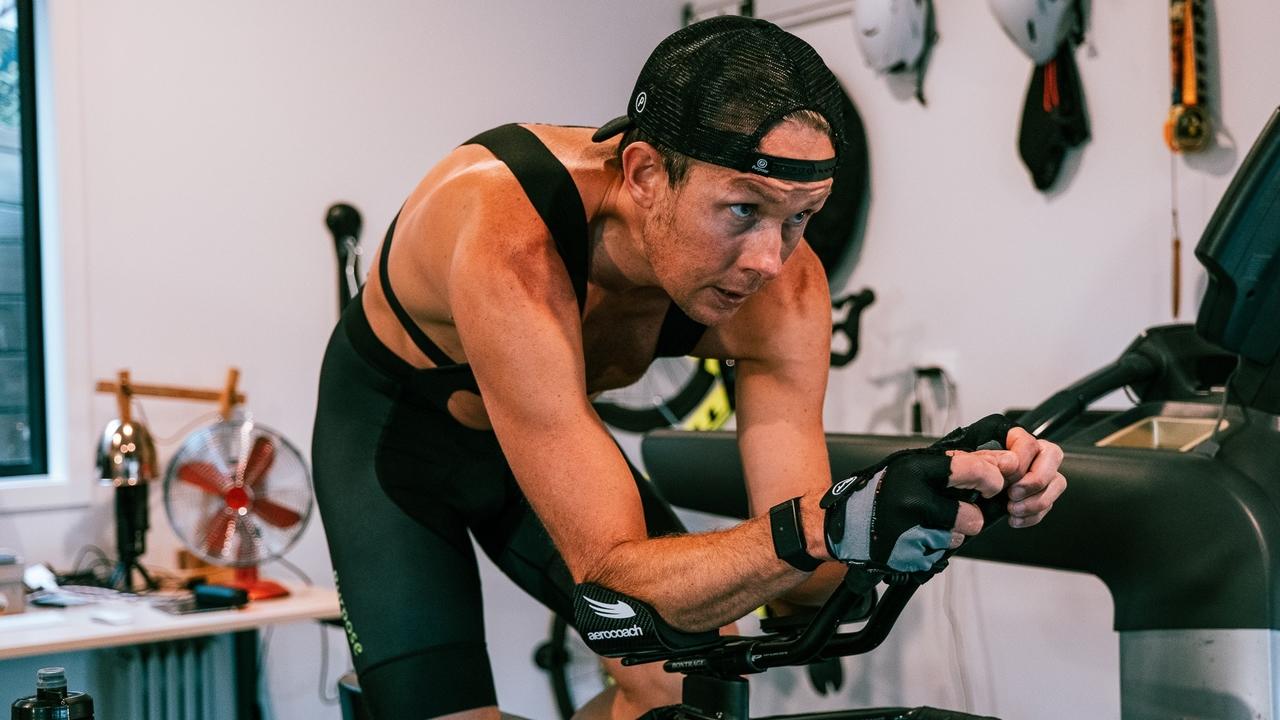 In this blog, we are going to summarize a recently published review by former AUT PhD student Dave Shaw on the evidence for and against exogenous ketone ingestion (11), as well as some of our own personal experiences. Dave’s PhD included studies on both the ingestion of exogenous ketones in a sports drink and longer-term adaptation to a very low-carbohydrate, ketogenic diet (10, 12), with one of the main purposes of this review being to highlight the stark differences between these two interventions. In this blog however, we are going to focus on studies of exogenous ketone supplementation for endurance performance. Ed (PhD student & Endure IQ LDT102 guest instructor) was fortunate enough to be part of the team of authors writing the review.

For instance, ketosis achieved via ingestion of exogenous ketone supplements raises blood ketone concentrations without requiring a reduction in hepatic and/or glycogen availability, whereas, as we discussed in a previous blog, achieving ketosis via a long-term very low-carbohydrate diet likely requires a reduction in liver glycogen storage (7). However, exogenous ketone ingestion does not appear to increase fatty acid availability in the blood for transport to muscle and oxidation, whereas increased fatty acid availability is a consistent feature of endogenous ketosis, or ingestion of a ketogenic diet (11). Therefore, ketosis should not be considered as one state – metabolically these are clearly quite different interventions. The source of the ketosis is therefore relevant to whether it is likely to be a useful intervention for an endurance athlete.

The main rationales for ingesting exogenous ketones during endurance exercise is two-fold. Firstly, exogenous ketones may provide an alternative fuel source or help modulate fuel metabolism in a manner favorable for performance. Secondly, ketones are an ‘efficient’ fuel source, producing higher energy yields per carbon unit than carbohydrates (14). Thus, exogenous ketone supplementation is a metabolic intervention, and the metabolic details described here and above need to be considered when critiquing studies investigating the effectiveness of their use during endurance exercise.

Demonstrating this, Table 1 and Figure 1 shows data collected by us (N = 7) regarding the magnitude and time-course of changes in blood D-βHB concentrations in response to ingestion of one serving of the commercially-available exogenous ketone beverages Kiss my Keto (Salt), Keto Force (salt), Keto Plus (salt + medium train triglycerides) and HVMN (monoester). It is clear that the monoesters provide more substantial increases in blood D-βHB concentrations, but there is also a large intra-individual variation in the response. 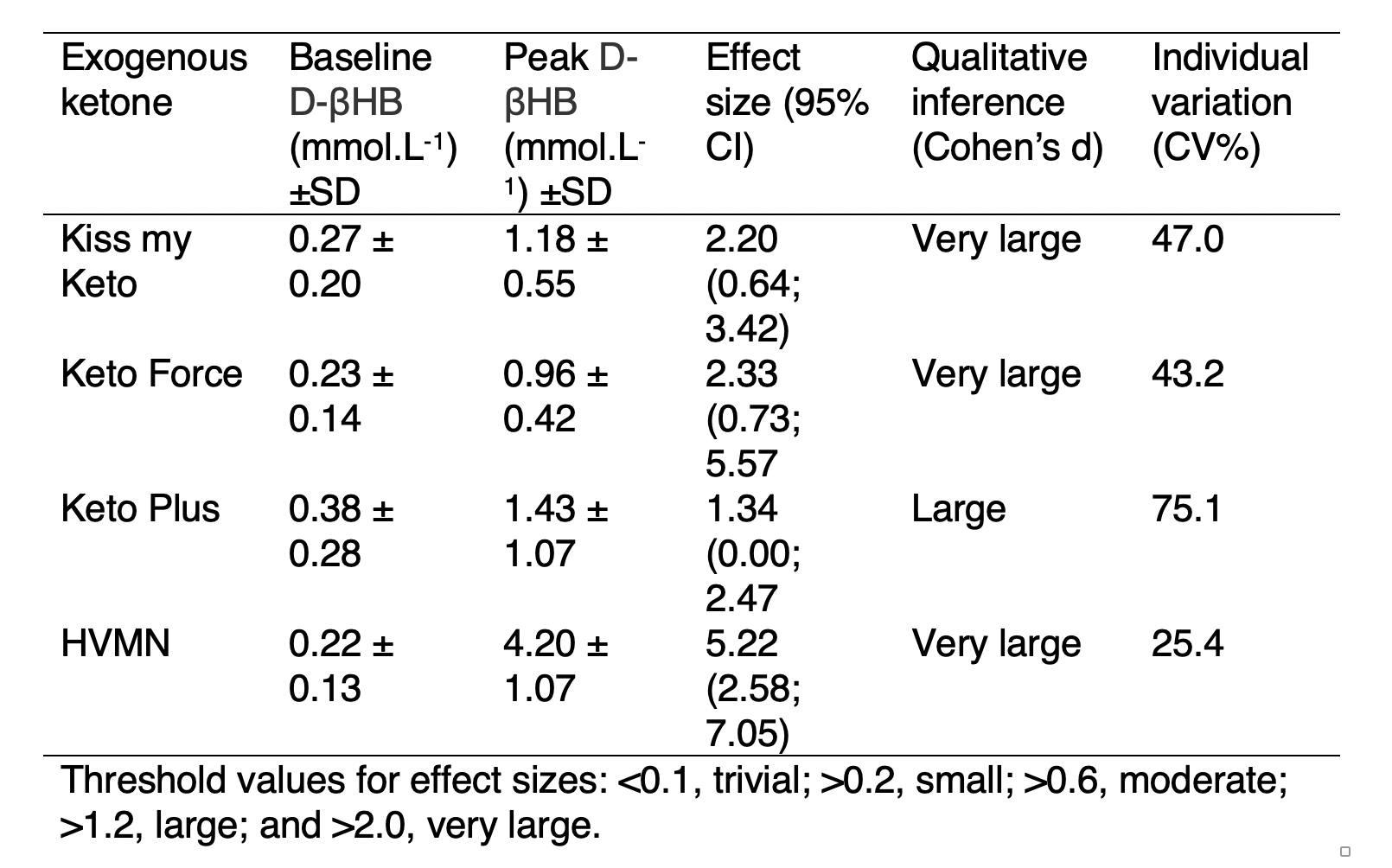 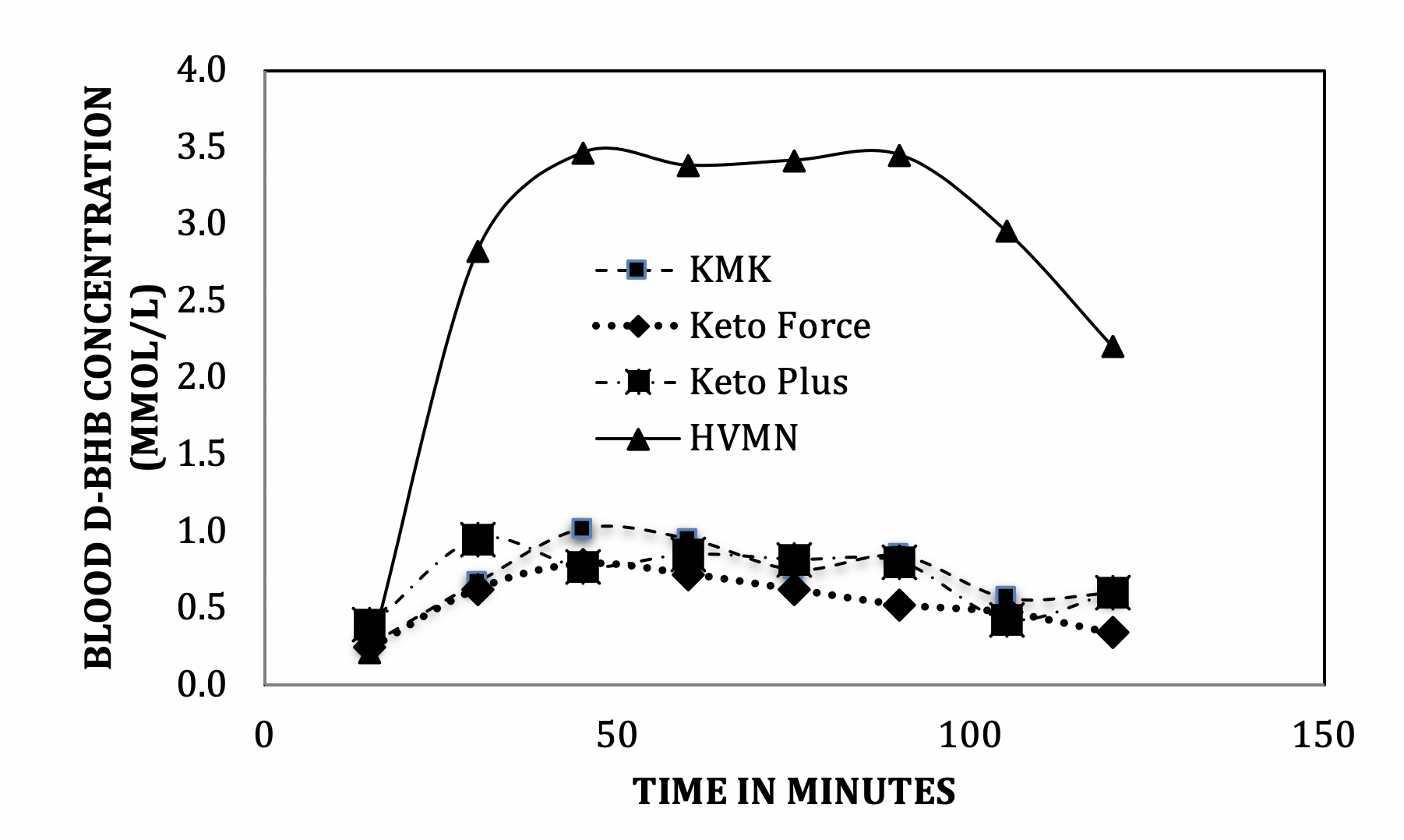 From here on we will discuss the evidence cited in the review related to exogenous ketone supplementation and its effects on endurance performance.

What were the conclusions?

The review separated studies into those investigating high-intensity and moderate-intensity endurance performance. “High-intensity” endurance performance was defined as endurance exercise at an intensity of greater than 80 % of VO2max, lasting up to ~3 hours. Therefore, the studies synthesised in this part of the review do not directly apply to long-distance triathlon, although they may tell us about shorter-duration races like Olympic-distance triathlon or give us guidance around likely performance responses to exogenous ketone supplementation during high-intensity training sessions. Shaw, here considered studies according to the magnitude of the ketosis elicited, and the acute diet around the performance trial.

Exogenous ketone salts, diesters, and butanediol providing modest elevations in blood D-βHB concentrations to ~1 mmol.L-1 or less have tended to show no effects on high-intensity performance (6, 8, 9, 12), with one study showing negative effects apparently related to gastrointestinal distress (4). Absence of performance effects here are understandable in the context of the accompanying physiological data, which appears to show minimal effects on variables such as oxygen consumption and blood lactate accumulation (6, 8, 9, 12). Given that the main rationale for exogenous ketone supplementation during this type of exercise is the theoretically enhanced efficiency of ketone metabolism compared to carbohydrates and fats, it may be that a greater ketogenic stimulus (i.e. higher circulating concentrations) is required to realise ergogenic effects.

In that regard, exogenous ketone monoesters providing blood D-βHB concentrations of >1 mmol.L-1 have not yet been convincingly shown to improve ecologically-valid simulations of high-intensity endurance performance (2, 3). By ecologically-valid, we mean simulations of performance with relevance to the real-world of competition – here it was identified studies that had their participants complete their performance test with and without having had breakfast, and with or without carbohydrate in-race fuelling. We could speculate that the favorable performance response observed following combined exogenous ketone monoester and carbohydrate ingestion during a 30 min time-trial performed after an overnight fast, might facilitate improved power outputs during specific fasted training sessions (1), which would plausibly be beneficial to athletes performing overnight fasted training sessions with carbohydrate supplementation during exercise. However, we should note that at this point the specific effects of exogenous ketones on the adaptive response to training are not yet known.

Moving to “prolonged, moderate-intensity” endurance performance more relevant to long-distance triathlon, at the time of the review’s publication, no studies had been published on exogenous ketone supplementation and performance in this intensity domain. Whilst there is concern about the potential for exogenous ketone-induced gastrointestinal distress (4, 12), these concerns can be largely alleviated by selecting the appropriate type and dose of exogenous ketones (13). In perhaps the most interesting result published so-far, researchers from the U.K. demonstrated that adding a ketone monoester to a carbohydrate-containing sports drink during two hours of steady-state exercise acted to reduce muscle glycogen utilization and therefore spare endogenous glycogen stores, with accompanying higher intramuscular fat utilization and lower respiratory exchange ratios, indicative of reduced whole-body carbohydrate oxidation and increased whole-body fat oxidation rates (1). These are certainly exciting results within the context of long-distance triathlon; indeed, any sparing of endogenous carbohydrate stores is likely to be advantageous to long-distance triathlon performance as we have discussed previously (5). However, these results do need to be replicated before we can totally be sure of the metabolic effects of exogenous ketones.

Now we have discussed the various metabolic and performance responses to different exogenous ketone supplements, we would like to share some of our own field testing data from Dan and Terenzo when using the commercially available ketone monoester HVMN. The data shown here is taken from a standard training session on the bike, consisting of 4 x 30 min at just above Ironman power over a total duration of 4 hours and 20 min. Whilst not completely controlled (e.g. breakfast was different), the data provided some interesting insights. Both Dan and Terenzo ingested one vial of HVMN (25 g) mixed in a bottle of fluid before riding, and then ingested one further vial in a bottle mixed with 60 g of carbohydrate solution over the duration of the session. Subjectively, Dan didn’t feel that great, whereas Terenzo had a great session. Interesting, in Dan’s data (Figure 2) you can see a marked decrease in blood glucose concentration (from 4.5 to 3.5 mmol.L-1, see solid red line), at the same time point when blood D-βHB was at its highest (from 0.2 to 3.1 mmol.L-1). 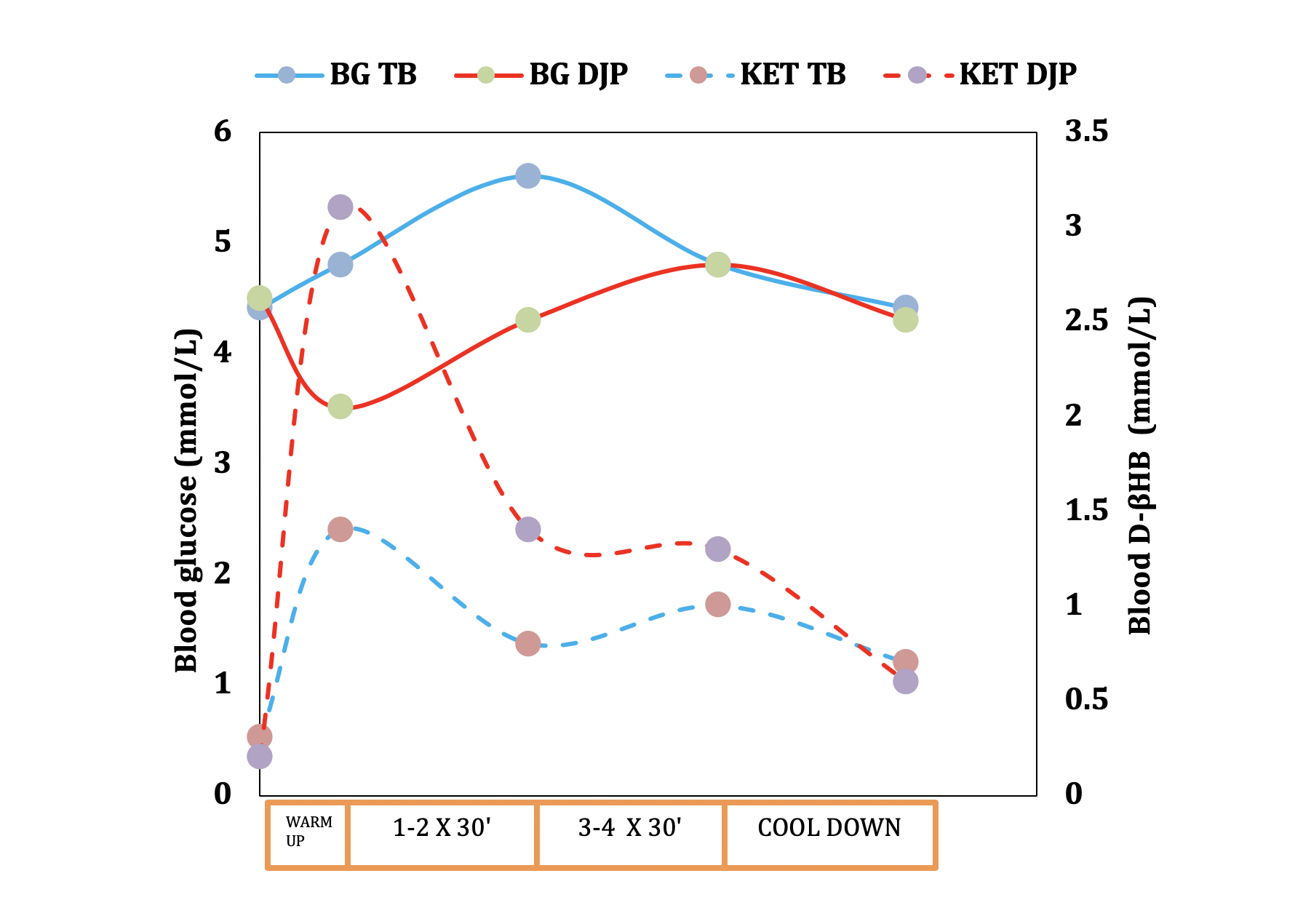 Figure 2. Blood glucose and D-βHB concentrations in Dan and Terenzo during an Ironman-specific training session (4 x 30 min at just over Ironman power) with the exogenous ketone monoester HVMN ingested before and during the session.

Dan speculates that when both substrates are present in high concentrations in the blood (D-βHB and glucose), an unnatural physiological state, the body removes glucose to try and reach some kind of equilibrium. However, this of course is just theory and speculation. That being said, Dan has also had some great races using ketones (1-3 butanediol), which give modest increases in D-βHB concentrations (~1-2 mmol.L-1 increase). This includes Kona in 2018, where he added 0.2 g.kg-1 butanediol to his carbohydrate sports drink ingested during the cycling section.

What does this mean for us as long-distance triathletes?

Well, perhaps frustratingly, the conclusions of the review tell us that science has so far not yet definitively told us if exogenous ketones should be ingested during a long-distance triathlon to help us improve performance. The review is a great point of reference for understanding the differences between the different exogenous ketone supplements, with ketone monoesters specifically elevating blood D-βHB concentrations to the greatest degree and therefore providing the greatest exogenous ketogenic ‘stimulus’. There is some evidence that adding a ketone monoester to your carbohydrate-containing sports bottle may help preserve finite endogenous carbohydrate stores, which would surely be beneficial at the back-end of an Ironman. There doesn’t yet appear to be any evidence against trying exogenous ketone supplementation during a long-duration training session, so this might be something worth experimenting with in an effort to stay ahead of the curve and your competitors. But remember, nothing new on race day!

If you'd like to learn more about the low carbohydrate approach and how it can be a game changer for long distance triathlon performance, check out our Endure IQ online course - LDT101: The Practical Application of Low Carbohydrate Performance for Long Distance Triathlon.