“Big” Vegan, and Finding the Real “Game Changer” for Your Endurance Performance 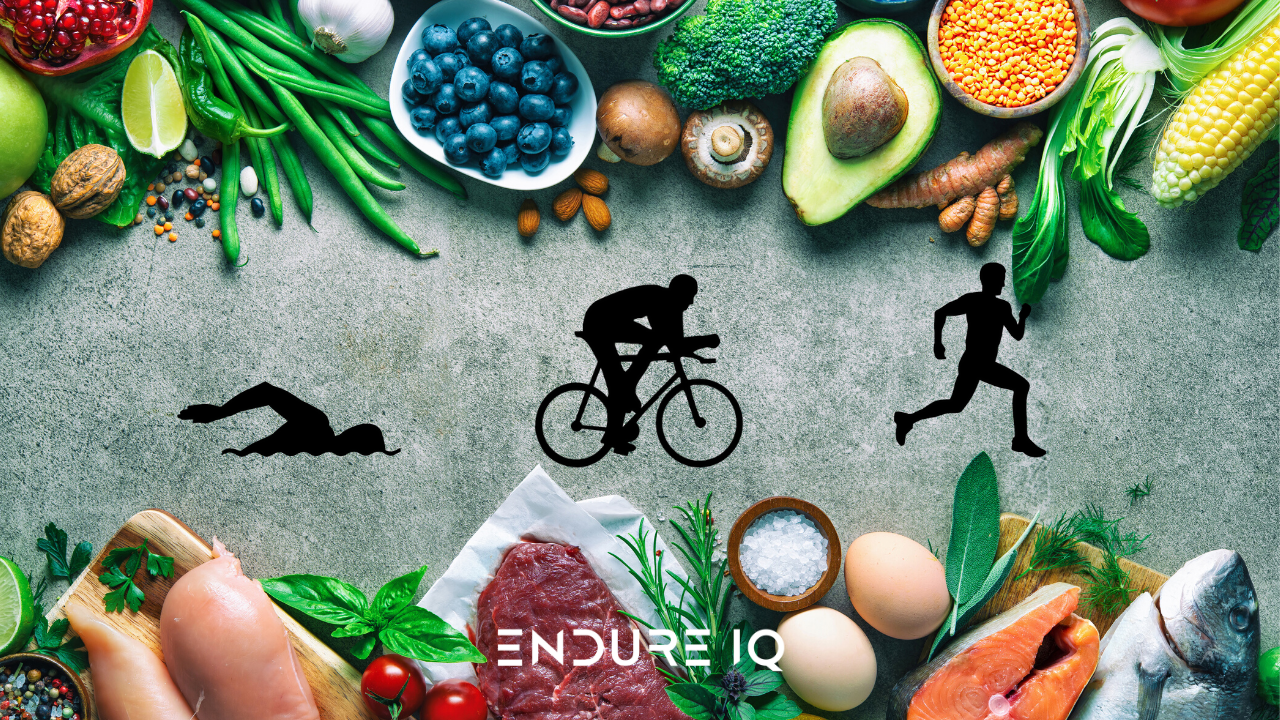 We’ve watched  the battleground in diet shift recently from debates around saturated fat, and eating more healthy whole grains, to a largely vegan agenda. The ideology of the Garden of Eden diet, is close to the vegan ideals driven primarily through the Seventh Day Adventist Church, and touted as a recruitment strategy (or “health ministry”). Recently, it's gone to greater levels. The Netflix doco “Game Changers” has seen widespread discussion around this topic, and we’ve been fielding a lot of questions around this of late. This blog is our attempt to sum up our thoughts.

Neutral or unresolvable in the debate:

First, it’s impossible to unpack cause and effect from prospective epidemiology and cross-sectional studies in this area because the idea of eating less animal fat in particular has been an ingrained public health message for decades. On the same basis, we won’t claim that the higher observed incidence of depression and anxiety for vegetarians and vegans in some epidemiological studies is causal (see here for a review of the recent research).  Or that the fact that the Seventh Day Adventist men who have the lowest sperm count or motility are the vegan ones (3). All of these studies are impossibly confounded. You can’t have it both ways, so we will ignore both sides. The much-touted China study of course falls into this category, especially when you consider the confounding of Hepatitis which is well known as a serious shortcoming of the China study (see Denise Minger’s discussion and re-analysis of the China study (4). This is a seriously interesting read if you want to get into the nitty-gritty of the truth vs fiction in epidemiology and veganism).

We’re unaware of any study which has tested the hypothesis that the exact same nutrients in the diet, one from animal and plant products, the other from exclusively plant products, have superior outcomes one way or another.

It’s almost certain that humans evolved in an omnivorous environment. We are morphologically omnivorous. Despite, false science in movies like the Game Changers, our colon and general design is omnivorous, not herbivorous. There is a theory that the energy density from animals provided part of the causal chain in humans developing a brain size which can survive its own high energy demand with low food security (i.e. starvation sometimes). Humans are very good fat burners, endurance runners, and “fat storers”, compared to other animals. It is likely that the well-developed ketogenic system humans enjoy is part of this evolutionary legacy. That said, who knows exactly how ancient humans lived and what they ate exactly (or what the variation in these diets were), and furthermore, does this in any way mean what they did was optimal?

There is a claim that animal farming is a major cause of climate change. We’re certainly not experts in this field. It’s hard to unpack all of this, but here’s our lay view:

A classic poor outcome from a well-meaning climate change agenda is that the NZ government recently agreed to remove meat and dairy from NZ hospitals for climate reasons.

There is a claim that meat and animal products cause inflammation. Correct, of course they do – they activate the anabolic (building) response through insulin and mTOR pathways (5). Inflammation is critical to growth and building. Cell division and growth is an inflammatory process. It’s chronic inflammation that’s the issue, and we’re not aware of how meat and animal products meaningfully contribute to this in the context of a whole food diet. Randomised trials of such diets show no evidence of chronic inflammation, in fact they resolve this (See David Ludwig’s recent review on low carb high-fat diets (6)). We’ll talk more about the anabolic/catabolic system later.

Metabolic flexibility – The ONE big idea to understand

Humans are designed to be metabolically flexible (also called being “fat adapted”). That is to say, if you want the best out of your brain and body, then you should be able to rely on fuel from both carbohydrates and fats, as, and when, you need them. Someone who is metabolically flexible can use fat as the primary (and almost exclusive) fuel when they are resting, sleeping, and moving around at a fairly slow pace. As they start to move around at a faster pace – like fast running – then they will be able to take advantage of extra fuel supply from carbohydrate, and when they are going nearly flat out, they will rely almost exclusively on carbs for fuel. This is exactly what we teach in our course LDT 101: The Practical Application of Low Carbohydrate Performance for Long Distance Triathlon. Studies have shown that having a high fat oxidation (and thereby being metabolically flexible), has positive implications on long distance triathlon performance (i.e. the more metabolically flexible you are, the better your long-distance triathlon performance (7).

We measure metabolic flexibility in our lab using online gas analysis. Dan goes through this in greater detail in Endure IQ LDT101, but in brief we measure the proportion of inhaled and exhaled oxygen and carbon dioxide to understand just how much fat and how much carbohydrate someone is using from rest to flat out exercise. What you want to see during this test is in Figure 1 - that is this athlete mostly uses fat for fuel at low running speeds, through to mostly carbs at faster speeds. This athlete is a male triathlete who has been using the low-carb, healthy-fat approach for over two years. He is highly metabolically flexible. 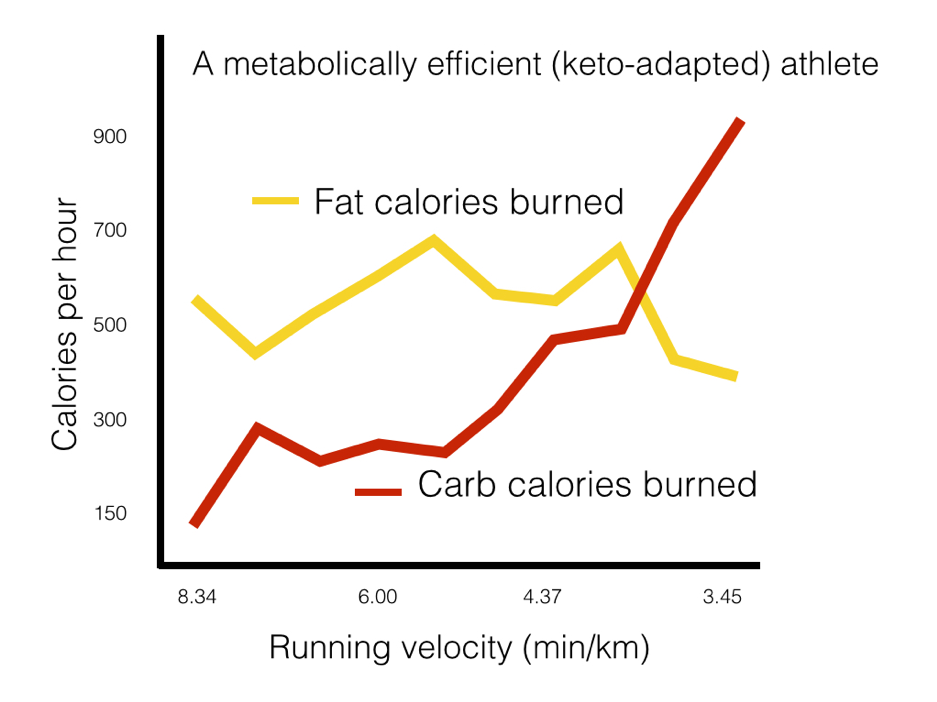 Figure 1: Calories per hour derived from carbs (red) and fat (yellow) [vertical axis] for a metabolic efficiency test – treadmill-running speed (min per km) [horizontal axis] using respiratory exchange. The athlete is a 39-year-old male elite triathlete who has been LCHF for at least two years.

Other athletes we’ve tested aren’t as good at using fat as this athlete. Here’s another test, however this time the athlete is metabolically inefficient (Figure 2). This woman is a pretty good age group triathlete, but she is really not able to access her body fat stores as a fuel source at any exercise intensity. 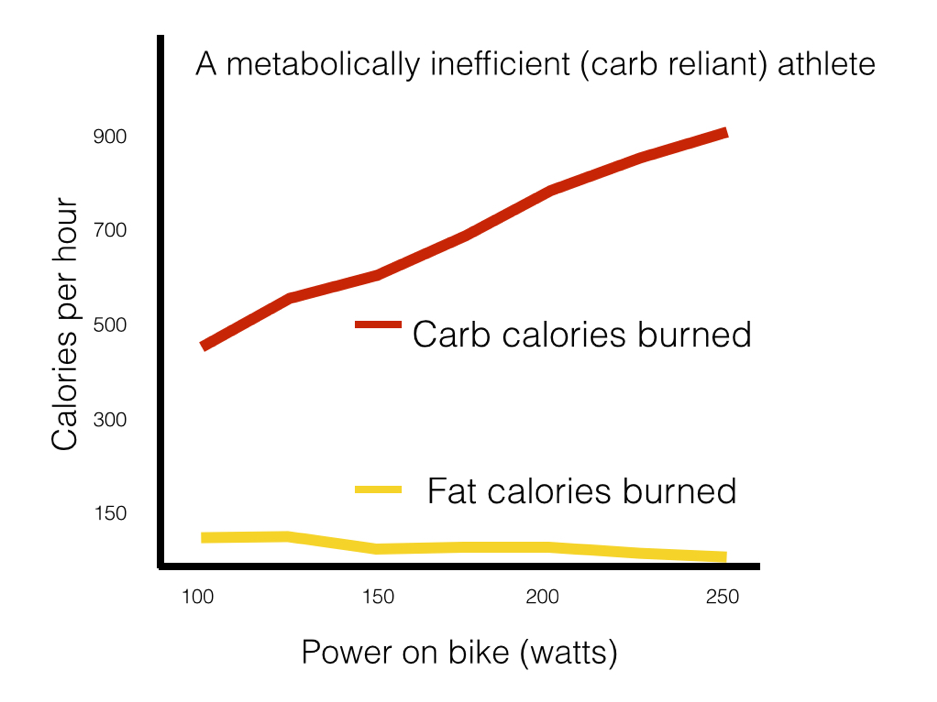 These two athletes are bread and cheese. One can easily access their body fat stores as a primary fuel at low exercise intensity. He can provide energy from fat right up to very high exercise intensity. He is a fat-burning machine who can access the tens of thousands of calories of fat he has stored around his body. He can maintain a healthy lean body weight easily and doesn’t have to eat sugar and carbs every time he goes training.

The other has to rely on the very limited carbohydrate supply (maybe 2-2500 kcal) she has stored in her muscles and liver. She has to eat extra sugar every time she trains, and fuel up again afterwards. She’s tired and has trouble getting her weight down to race.

Being a fat burner has obvious advantages in some sports, like endurance events where having enough fuel to make the distance is an issue. This includes long-distance running, triathlons, cycling and anything else where you are training, racing or competing for a few hours or more. You have access to a big fuel tank (fat) and can spare the small tank that provides extra power when you need it (carbs). In other words, you can go faster for longer.

But it doesn’t stop there. The fat burner has the potential for significant health and performance advantages in any sport where weight, cognitive performance, fuel, and high training and competition loads are a factor. This includes weight class sports, all day sports like sailing, and team sports.

Vegan and fat-adapted? An impossible mission.

A diet which is based on whole foods from plants and animals is naturally lower in carbohydrate, moderate in protein and higher in fat. Such a diet provides good outcomes for all the major metabolic measures of interest – it’s anti-inflammatory, and reduces all of the parameters of metabolic syndrome. Such a diet can allow an athlete to access fat as a primary fuel source – because fat is burning cleanly without the reactive oxygen species of carb-burning meaning the chances of prolonged low-intensity endurance exercise creating chronic inflammation are reduced.

Importantly having the catabolic (fat burning) system intact and fully functioning doesn’t impair the ability of the anabolic (carb-burning) system functioning at higher intensity exercise (8), it just means you get the best of both worlds. You can augment your fuel with carbs you eat and get the benefit, and be twice as good at the overall load of accessing fat for energy at lower intensities. Why would you avoid that?

And all this has virtually nothing to do with avoiding animal products, especially meat. In our opinion, well-raised animal products are convenient, whole and nutritionally complete food sources for humans, especially those wanting to avoid supplementation and stay lower in carbs and therefore be metabolically flexible. Getting some, or even most of your protein from healthy animal sources is going to mean you can also get a range of healthy fats, keep the carbs down, and expose yourself to the range of essential nutrients necessary for human health and performance.

You can go vegan if you want, that’s fine. Just be aware of the nutritional (deficiency) risks, and be aware that it’s going to be harder to get low enough in carbs to be fat adapted. It’s possible to eat well enough on a plant-only diet, but it is likely very difficult. For almost everyone, including us and the many athletes much better than us, they manage their diet for peak performance by being whole-food omnivores. The vast majority of elite athletes eat this way. That doesn’t prove the point, in the same way “Game Changers” doesn’t prove the point.

The point is that, in our opinion,  omnivorous fat-adapted humans are at a performance advantage from firstly, their advantageous effect on metabolic flexibility and secondly, nutrient availability. Reducing animal protein means you reduce the amount of fat in the diet, and then to satiate yourself you typically eat more CHO, making it almost impossible for an athlete to meet daily calorie requirements whilst keeping carbs low with a restrictive diet.

The vegan/not debate is essentially an unwinnable argument. To us, people will see the world the way they want to. The fact that L. Ron Hubbard could found and run the Church of Scientology is evidence enough that people can believe anything and defend it until the end of the earth.

Of course, therefore I can’t be excluded from that either. We’ll leave that judgement up to you. :)