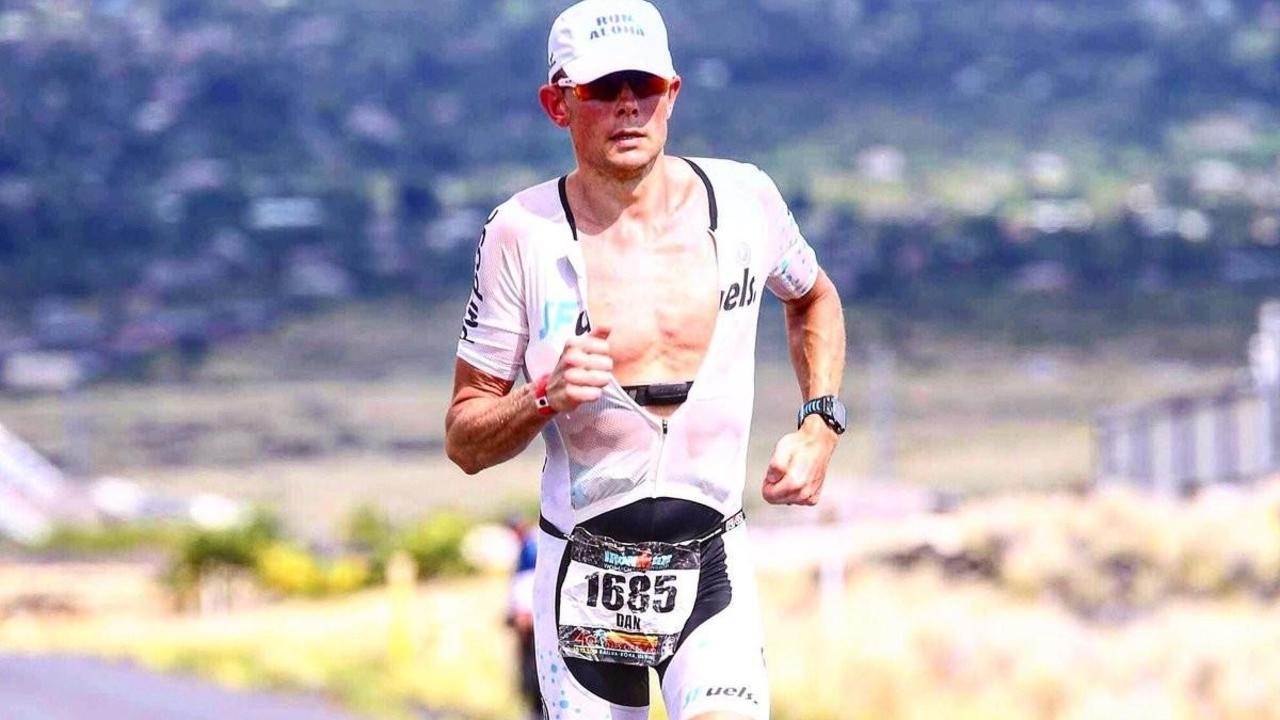 As all long-distance triathletes will know, a hot topic and key consideration when fine-tuning your preparation for the Ironman World Championships in Kona is heat. The effect of the high environmental temperatures encountered at The Big Dance on our physiology, psychology, and performance is so pronounced that we are actually putting together an entire course dedicated to it – LDT103, for which enrolments will open in May 2020.

This blog will summarize a recently published study conducted at AUT by my PhD student Ed Maunder (5), which focused on how acute heat stress impacts substrate metabolism during endurance exercise (i.e. fat vs carbohydrate use). We like to talk about this topic a lot and the implications of this study nicely link back to the important principles we outlined in our online course Endure IQ LDT101: The Practical Application of Low Carbohydrate Performance for Long Distance Triathlon. It’s undeniable that, reserving our limited carbohydrate energy stores during a long-distance triathlon is critical for getting over the line in the fastest possible time.

Prevailing thoughts on the topic

We know from research conducted in the 1990s in Australia, that when we cycle under environmental heat stress, a much greater proportion of our energy requirements are met by carbohydrate metabolism – from liver (3) and muscle glycogen (2) in particular – than when we perform identical cycling in temperate conditions (1).

To put this into perspective, the 220 W of power produced during the bike leg of Ironman New Zealand in Taupo will rip through less of those precious glycogen stores than 220 W during the bike leg in the searing heat of Kona. These effects are only exacerbated when one considers the research conducted at the University of Birmingham demonstrating that our ability to take in, absorb, and utilise energy from sports drinks is compromised by heat stress (4); thus putting further strain on our body’s own endogenous carbohydrate stores. As we covered in LDT101, this has important implications when we consider that carbohydrate availability is a key limiting factor for performance in full-distance Ironman triathlon.

However, it is worth considering that many of these studies were conducted under quite extreme conditions, characterised by environmental temperatures of ~40°C, often without fan cooling to simulate riding through still outdoor air, and quite high exercise intensities. Translating this research to Ironman triathletes riding the course in Kona is therefore not easy. As such, we sought to add some specific details to the very high-quality existing research:

(i) Does heat stress alter carbohydrate use during cycling at lower as well as high exercise intensities?

(ii) Will I see much bigger metabolic changes when the heat is really high, compared to more modest hot temperatures?

To go some way towards interrogating these questions, we conducted two separate acute experiments. In the first, more preliminary study, we had trained cyclists come in to our environmental chamber and perform a traditional step test in 18°C and 35°C, both at 60 % relative humidity. During the step tests we collected some thermoregulatory data, as well as blood and expired gases to get a handle on what was going on metabolically. This step test is the classic method of identifying an athlete’s maximal fat oxidation rate, as described in Endure IQ LDT101.

For analysis, we identified a low, moderate, and high intensity for each cyclist, based on individual ventilatory threshold. We therefore could compare metabolic responses to the two environmental conditions at low, moderate, and high workloads. The data suggested that the heat stress induced increase in carbohydrate oxidation rate was larger at the higher intensities. Specifically, there was very little difference in carbohydrate oxidation rates between the two environmental conditions at the low exercise intensity, with maybe some tendency towards an increased rate of carbohydrate oxidation in the heat at the moderate intensity, but a quite pronounced increase at the high exercise intensity. See Figure 1 below: 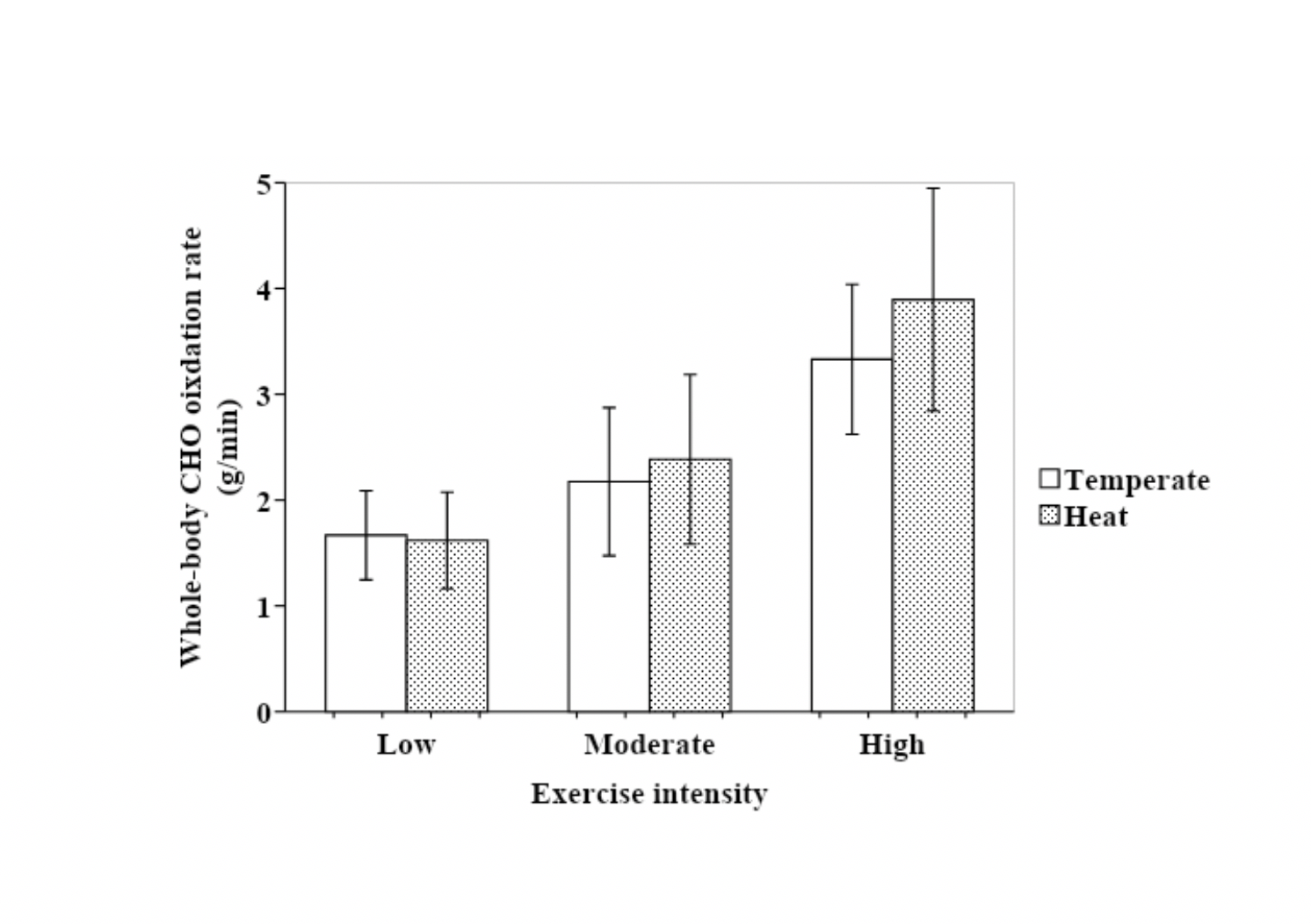 It was somewhat surprising to us that no differences were seen during the low intensity cycling, which one might have attributed to the short duration of the protocol limiting the effects of the heat stress on the cyclists’ physiology. Fortunately, as part of this study, we also asked the cyclists to come back and perform a longer (60 min) bout of cycling at the low intensity in 18°C and 35°C. Confirming our step test results, we again didn’t observe any differences in carbohydrate oxidation rates. What does this mean?

“Under moderate environmental heat stress (35°C), carbohydrate metabolism probably isn’t affected unless we start to put the hammer down.”

So practically what does this mean?

When racing in the heat, the data suggests that the preservation of glycogen stores is of greater consideration. As such, it’s imperative that we consider our pacing strategies. For instance, if we were to let our Wattage substantially increase from a manageable 220 W to 300 W on the climb to Hawi for example, we might pay for that with quite a large increase in carbohydrate use and risk bonking later on in the marathon. Likewise, when running out of the infamous "Energy Lab" where it’s uphill AND even hotter. And, as you will see in part two of this blog post (part 2 of this study), just how hot it is also plays a critical part in substrate use.

For the second part of the study, we investigated what would happen to fat and carbohydrate oxidation if intensity remained constant (Ironman intensity) and temperature increased (18, 28, 34, and 40°C, all with 60 % relative humidity).

We will cover this next topic in part 2 of this blog. ☺

If you'd like to learn more about low carbohydrate approach to long distance triathlon and how it can be a game changer for your performance, check out our online course - Endure IQ LDT101: The Practical Application of Low Carbohydrate Performance for Long Distance Triathlon