Sodium intake during endurance events: How precise should we be? 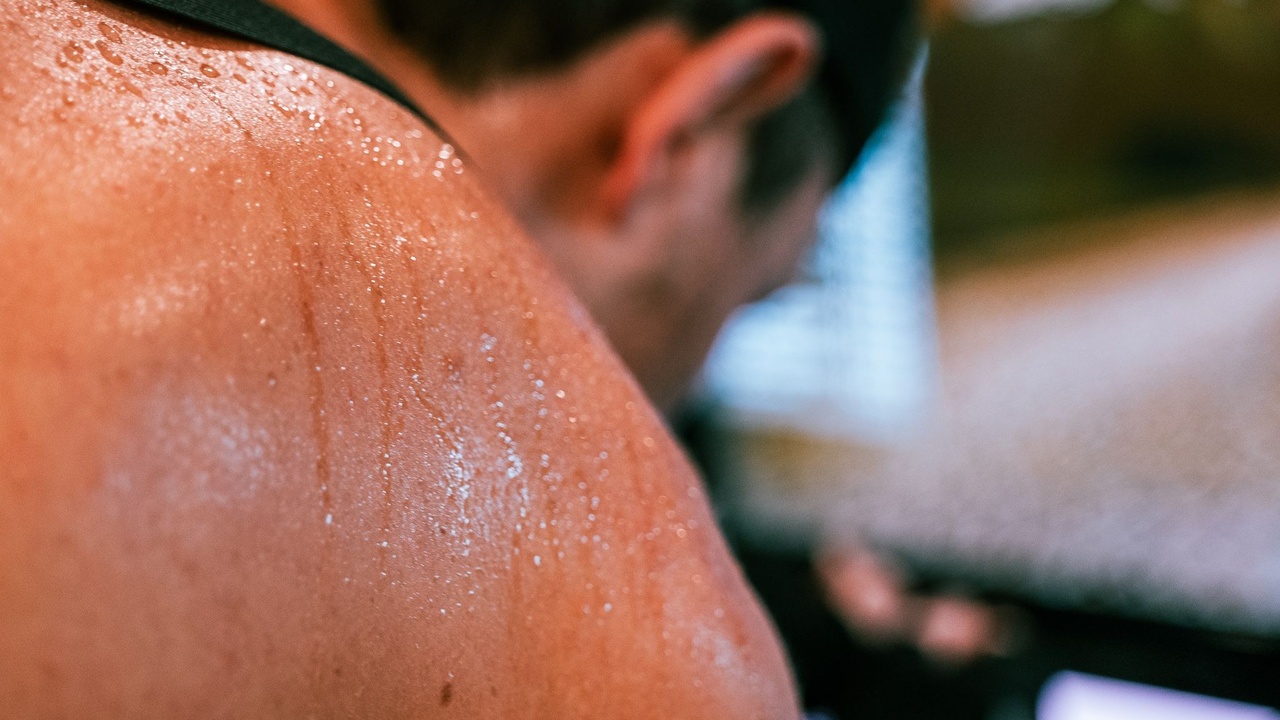 Discussion of electrolyte losses in sweat and the perceived need to supplement with sodium during competition is ubiquitous in endurance sport. Particularly triathletes. According to a recent survey, the vast majority of endurance athletes reported that they think they should be replace sweat sodium losses during racing (5). However, is it really something we need to worry about? In this blog, I will briefly describe the state of the evidence regarding sodium supplementation during endurance competition and outline why I think that ingestion of some sodium during competition is important, but also why I don’t think the majority of endurance athletes need to agonise over the details of their sodium supplementation regimen. If nothing else it’s going to reduce the number of decisions you have to make, so strap in!

First things first, what is sodium? Sodium is an electrolyte found in the body and is crucial for many physiological functions. The movement of positively-charged sodium ions – Na+ - across the membranes of neurons is part of the mechanism for how we transmit messages through our nervous system, such as when the brain sends a signal for our muscles to contract. Sodium is also present in our blood, and, like other variables such as pH and glucose, its concentration is tightly regulated within a relatively narrow range that suits our physiology best.

During exercise, we lose sodium in the sweat. In endurance sport, particularly when it’s hot, we can therefore lose vast quantities of sodium during a race. Back-of-the-envelope calculations tell us that, with sweat rates of 1-3 L.h-1 and sweat sodium concentrations of 0.5-2.3 g.L-1, endurance athletes can lose ~0.5-6 grams of sodium per hour in sweat. It is therefore not surprising that the benefits of replacing sodium ingestion during exercise has seen a lot of research interest.

However, even though we lose vast quantities of sodium in sweat during exercise, the sodium concentration of our blood actually increases. That might seem paradoxical but occurs because our sweat is hypotonic compared the blood. By that I mean that sweat has a lower concentration of sodium in it than our blood does, thanks to our very sophisticated channels for sodium reabsorption in sweat glands. Aside from helping to maintain sodium availability in the body for its important physiological functions, this response is useful in an endurance sport context. As we sweat during exercise and our blood sodium concentration rises, we are also becoming dehydrated due to the fluid that is lost in sweat. The increasing sodium concentration of the blood serves a useful signal that makes us feel thirsty, and therefore increases our drive to drink fluids to maintain hydration.

Now we have a bit of background on sodium and its loss in sweat, let’s take a look at the evidence for sodium supplementation during endurance competitions. Given how crucial sodium is in many different physiological processes, it might seem intuitive that supplementing with sufficient sodium during competition to match the significant amount lost in sweat would be beneficial.

However, the evidence for this practice, which is common in our sport, is actually not very strong. A systematic review published in 2019 concluded that there is no clear evidence for a performance-boosting effect of sodium supplementation in healthy endurance athletes, at least in competitions taking place in cool environments (3). Other studies have shown no effects on things like thermoregulatory function (2) or hydration status (4).

Like with all research in exercise physiology – and perhaps science in general – that’s all well and good at the group level, but we should consider if there are any factors at the individual level that might make us reach a slightly different conclusion with the athlete in front of us. Some athletes report being ‘salty’ sweaters; that is, they produce sweat with a higher sodium concentration than most. That is true, in the literature we see a wide range of sweat sodium concentrations at the individual level (6). These individual differences might mean that supplementing with sodium may be more important for some athletes than others, and might suggest having the electrolyte composition of your sweat tested to determine your sodium requirements for competition could be useful.

However, this is not an approach that I recommend. There is quite compelling – and old – data that shows a relationship between sweat sodium content and sodium intake in the diet (1- See Figure 1, taken from LDT 103, and adapted from Malhortra el al, 1960). This makes sense; those that have large sodium stores through ingesting a high sodium diet may not simply work as hard to reabsorb and retain sodium in the sweating process than those who have more moderate intakes. Therefore, by measuring your sweat sodium concentration, you may more simply be getting an expensive measure of how much sodium you have taken in through your recent diet. Accordingly, if you wanted the measured value to be an accurate reflection of what you might expect in your competition, the testing would need to have taken place following your pre-competition diet (and taper). There may be some individuals and some medical conditions in which sodium losses during exercise are dramatically increased independent of diet, although these are likely very rare. 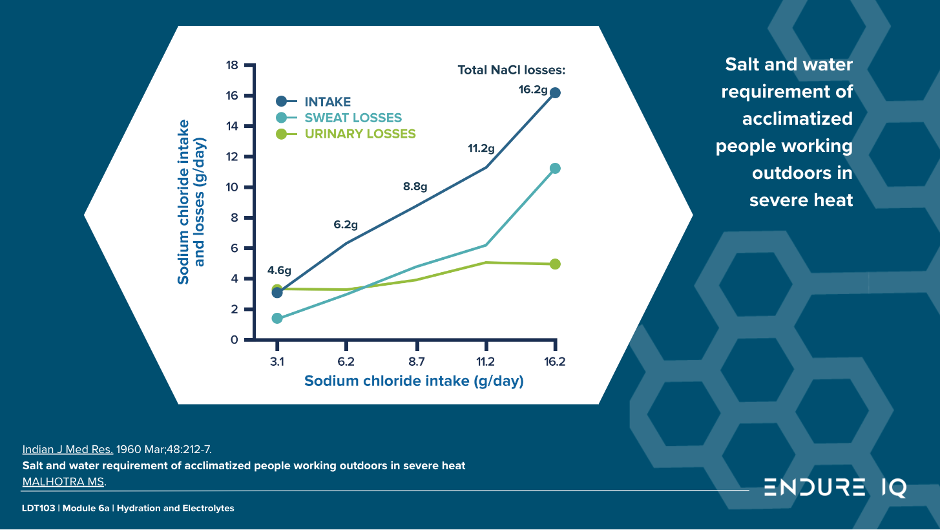 Figure 1: Relationship between daily sodium intake, and sodium losses in sweat and urine.

Last, one compelling argument for the lack of effectiveness of strict sodium requirements during exercise is questionable given the fact the serum osmolarity (the amount of sodium in the blood) is exceptionally stable, regardless of both sweat rate and sodium intake across ultra-endurance races. If sweat sodium content was really having an effect, wouldn’t we see large differences? Table 1, taken from our course LDT103, shows the serum osmolarity barely changes pre/post-event. There is also some good data that too much sodium can make athletes susceptible to maintaining too much body weight during racing (likely reducing race performance (8))- this is likely due to an excessively increased thirst response. Also, excessive quantities actually draw fluid back into the gut causing poor calorie absorption and gastrointestinal distress. 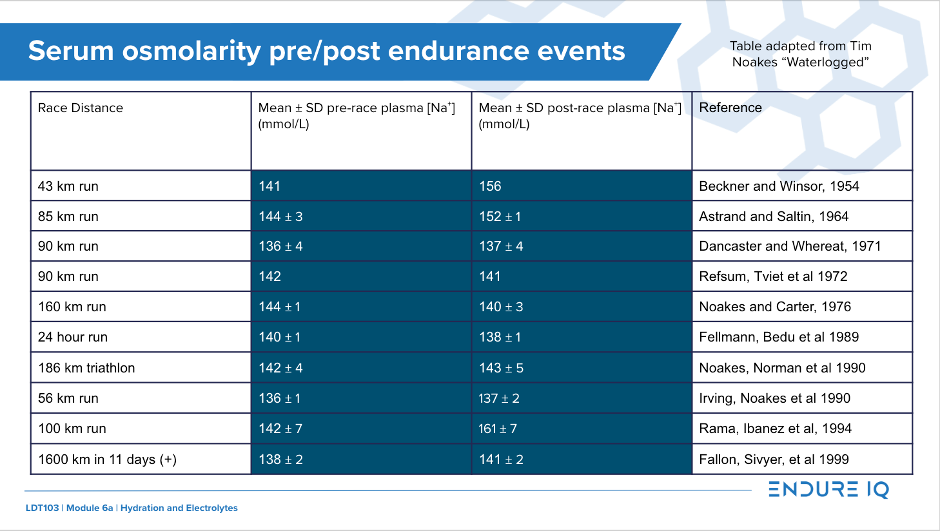 My recommendations on sodium:

Given the above, my recommendations are therefore as follows:

1. Don’t avoid salt – include sodium in your diet as normal before the competition. At SFuels, we have sodium in all our products. I'm not saying it doesn't matter at all, I'm saying just take some in your sports drinks, have it in your food. Problem solved!

2. Make sure your drinks and gels have some sodium in them (most products will have you covered!)

4. There is probably no need to try and match sodium intake during competition to sodium losses in sweat

For more information on hydration and electrolytes, together with interviews with world renowned experts on this subject, check out our online course LDT103.