The Role of Myofascial Slings in Triathlon: Part 1 – Understanding Our Sling System 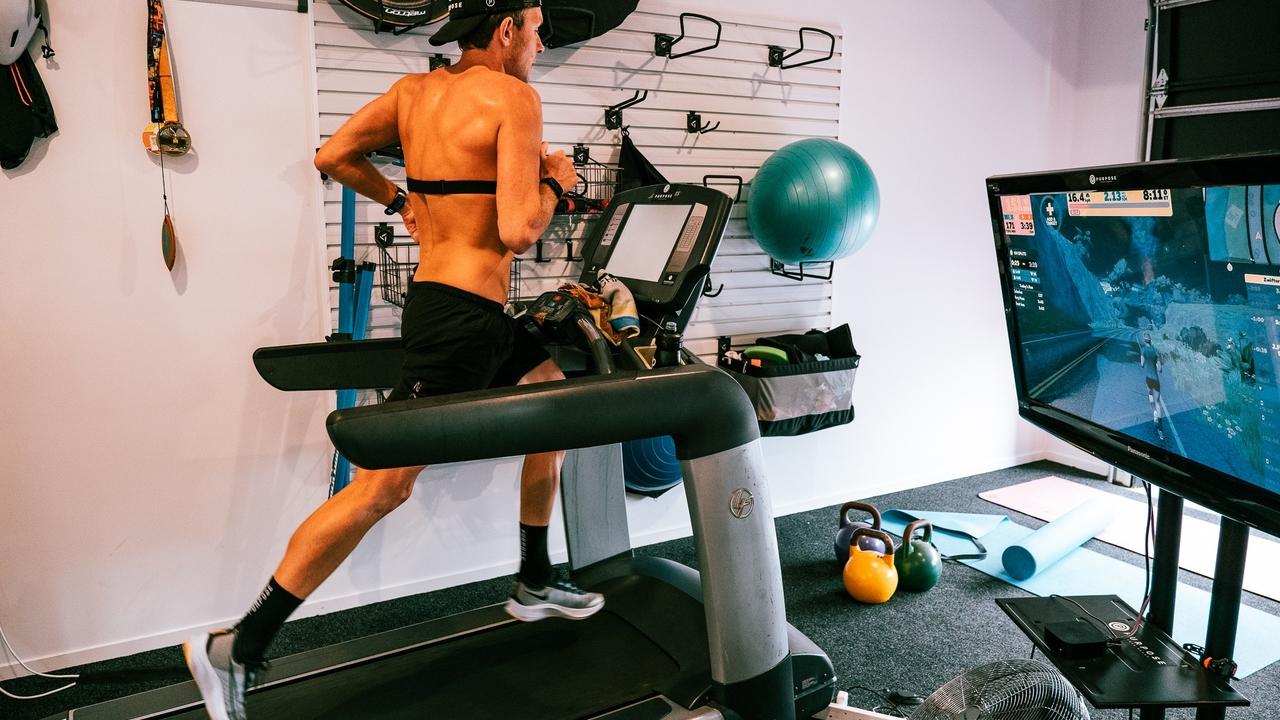 How “easily” we can perform a specific movement or task is a critical determinant of  Long Distance Triathlon (LDT). For example, to run a 3-hour marathon (an excellent running time in an Ironman Distance Triathlon) the average pace is  4:16 min/km. There are many athletes who can run 4:16 for 1 km; the issue most athletes face is that they simply can’t do it easily enough to do it 42 times back-to-back. In their online course Endure IQ LDT 102: Training Program Fundamentals for Long Distance Triathlon, Dan and the team at Endure IQ go through the rationale regarding how, for LDT, it’s likely better to focus on “specific strength” rather than lifting heavy weights in the gym. However, gym-based exercises where the main focus is to improve movement efficiency are still likely to be very beneficial, and, moreover, can be completed is less than 20 minutes; a key consideration for the time-poor long distance triathlete! Endure IQ have already covered how plyometrics could be one player in the quest to improve movement efficiency, but we should also consider the role of myofascial slings.

The human body is a vastly complex machine comprised of a range of tissues that provide protection, structure, and function to meet an individual’s needs. Traditionally speaking, our skeletal muscle system is responsible for movement. However, the explanation that all movement arises from individual or groups of muscles pulling on bones via tendons, simply does not capture the cascade of events that unfolds throughout our body during the execution of dynamic tasks like swimming, cycling and running. In reality, muscles never fully transmit their entire force via tendons, rather they distribute a large portion of their contractile force onto a web of connective tissue, known as fascia [1]. For example, the gluteus maximus, the largest and most powerful muscle in the human body, attaches ~85% of its fibers into the distal fascia (fascia lata) rather than into the theoretical muscle insertion (Figure 1) [1]. 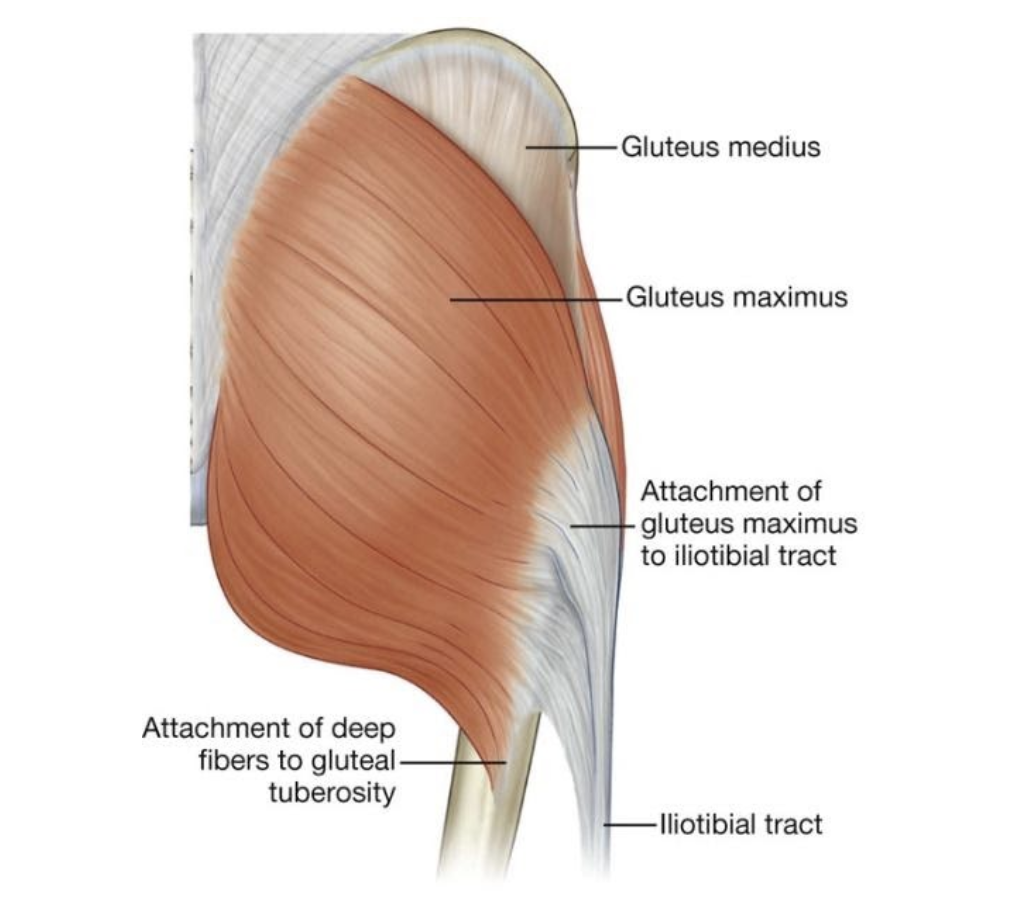 Figure 1: The origin and insertion of the gluteus maximus.

As fascia envelopes all of the internal parts of the body, it also allows skeletal muscles to transmit forces laterally to neighbouring muscle groups [2], which reinforces the concept that we need to train movement patterns as opposed to individual muscles (i.e. specific-strength big gear/low cadence cycling). Thus, it is evident that this tough yet pliable tissue, which provides the critical link between force transmission and elasticity, is often the overlooked key variable in the movement equation and conditioning.

The anterior oblique sling consists of the internal and external obliques, connecting with the adductor muscles on the opposite (contralateral) side of the body via the adductor-abdominal fascia (Figure 2)  [3]. During walking, the AOS stabilizes the body on top of the stance leg and assists the pelvis to rotate forward to prepare for the succeeding heel strike phase [4]. As the speed of walking progresses to running, the activation of the AOS significantly increases, which highlights the key role that it plays during the run leg of a triathlon. 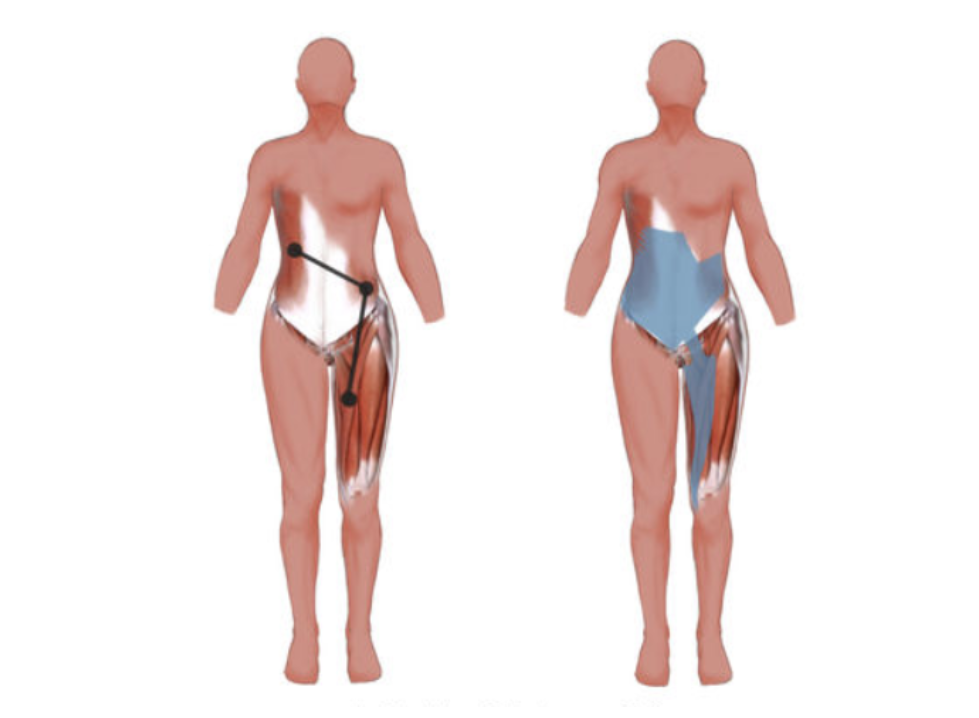 Figure 2: The anterior oblique sling consists of the internal and external obliques, connecting with the adductor muscles on the contralateral side of the body via the adductor-abdominal fascia

An imbalance in the AOS will result in a shearing force across the front of the pelvis which may present as groin pain. Furthermore, imbalances in the strength of the obliques can cause excessive trunk rotation, which may trigger back pain during repetitive movements such as swimming, cycling and running. To assess the strength of your obliques, perform a set of oblique crunches to either side of the body (Figure 3). 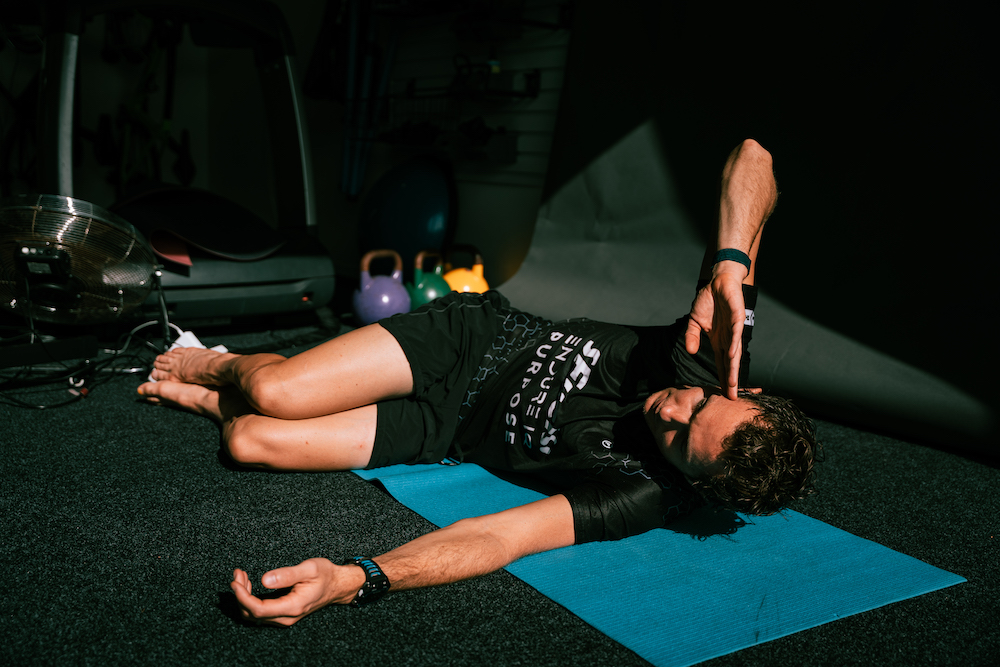 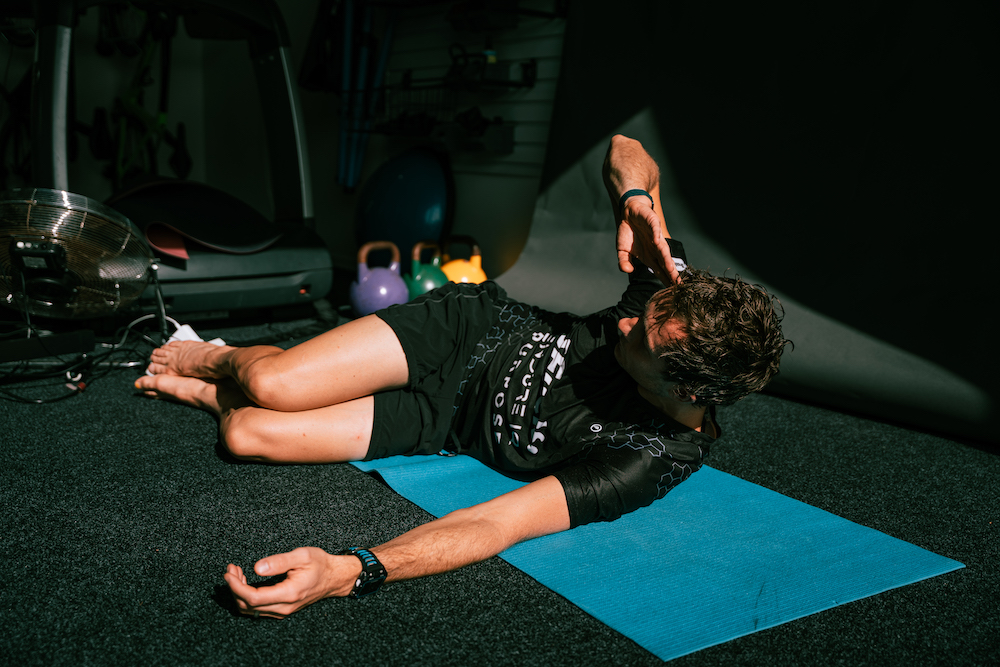 Figure 3: The oblique crunch requires a simultaneous flexion and rotation of the trunk.

Since we are bipedal creatures, our posterior musculature plays a critical role not only standing but also during dynamic tasks. The posterior oblique sling (POS) is integral in the functional control of movement and consists of the latissimus dorsi, gluteus maximus and the interconnecting thoracolumbar fascia (Figure 4)  [5]. 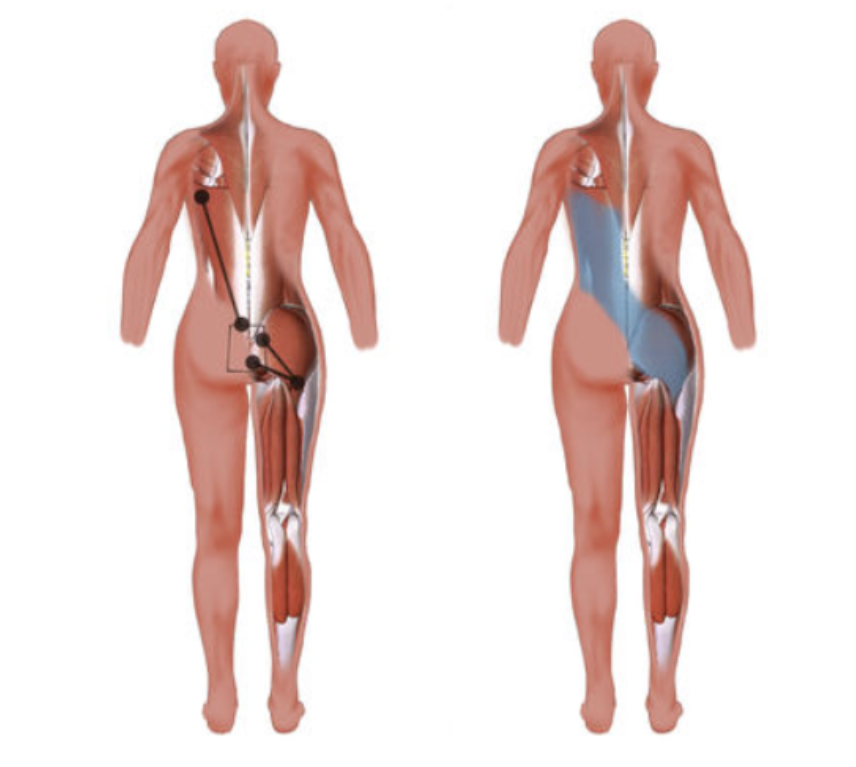 As the lower portion of the POS attaches to the posterolateral edge of the femur, this sling also interacts very closely with the lateral sling (see below). The role of the POS is evident during the single support phase of walking and becomes more prominent during running when the opposite arm and leg pull or extend backwards at the same time [6, 7]. The increased tension that is developed in the POS stabilizes the sacroiliac joint and preceding lumbar spine. In contrast, when the latissimus dorsi and gluteus maximus lengthen prior to the heel strike phase, this results in the storage of elastic energy which is released during the subsequent stance phase [5]. The same principle also applies during the free-style swimming stroke as the contralateral latissimus dorsi and gluteus maximus rhythmically contract and relax over multiple occasions. Thus, it is widely believed that this mechanism reduces the metabolic cost of contralateral movements such as running and swimming, and therefore help improve running and swimming economy.

The POS also plays a vital role during cycling as the gluteus maximus is the strongest and most powerful hip extensor. Furthermore, strength and endurance in the latissimus dorsi is also needed to maintain the required shoulder stability and a good arm position on the bike.

In comparison to the AOS and POS, the muscles that contribute to the lateral sling (LS) are relatively small; the gluteus medius, gluteus minimus, tensor fascia lata on one side, the same side thigh adductors and the quadratus lumborum on the contralateral side (Figure 5)  [8]. However, the LS exerts its influence over the hip and knee joint as it extends all the way down to the upper portion of the tibia via the iliotibial band (ITB). 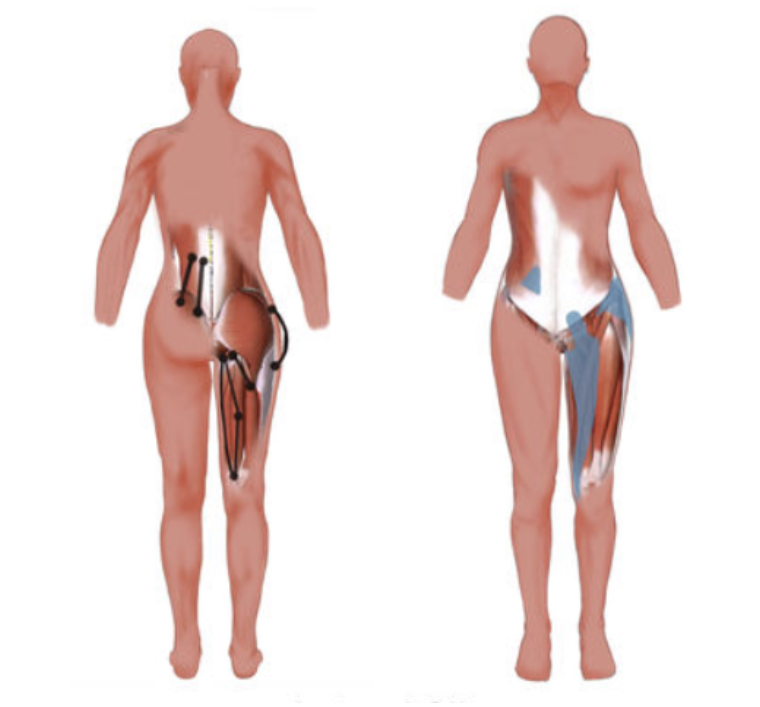 Figure 5: The lateral sling consists of the gluteus medius, gluteus minimus, tensor facia lata on one side, the same side thigh adductors and the quadratus lumborum on the contralateral side.

Functionally, the pelvis should operate in a neutral setting and during the single leg stance phase of walking and running, the LS helps to maintain a stable pelvis over the stance leg. If the LS is not functioning optimally, a pelvic drop on the contralateral side of the pelvis, known as a Trendelenburg sign, becomes evident. An imbalanced alignment of the pelvis will result in several compensatory mechanics occurring both in the lower limbs and in the trunk and if these issues are not addressed early, they can lead to both acute and chronic injuries. For example, an imbalance in the LS can cause the knee to turn out during cycling which can result in significant hip and knee pain. You can assess the functionality of your LS by facing a mirror and standing on one leg. If a Trendelenburg sign becomes evident, this indicates that you have a weakness of the LS in the leg that you are standing on.

Figure 6: A Trendelenburg sign will become evident if there is a decreased functionality of the lateral sling.

Take Care of Your Slings

If skeletal muscles experience constant tension or stress from chronically poor posture or repetitive movements, inelastic collagen fibers will be laid down to reduce the stress and to prevent further muscle damage. However, the increase in collagen content will result in both muscle and fascial tightness, and over time, the fascia will become rigid and will compress the underlying muscles and nerves. As fascia can withstand up to 2000 pounds of press per square inch [9], frequent and sustained stretches of 3-5mins are needed to help restore the optimal balance between strength and elasticity.

When the forces between the various myofascial slings of the body are balanced, they provide optimal alignment, increased movement efficiency, great force transfer and increased speed, all of which will positively influence your training and race performance.

From 2008 - 2016, Adam coached and managed various New Zealand weightlifting teams at key pinnacle events including the 2012 and 2016 Olympic Games and the 2010 and 2014 Commonwealth Games. Adam’s specialist background in the areas of strength and power conditioning has enabled him to work across several Olympic Games-based campaigns from track and field to sprint kayak. In addition, he has spent considerable time working within professional and international rugby union environments. Adam is currently employed by Emirates Team New Zealand as the Lead Strength and Conditioning Specialist for the 2021 America's Cup campaign and he also holds a Research Fellowship position within AUT University's Sports Performance Research Institute. Personally, Adam has made an impressive transition from Olympic weight lifting to ultra-runner, and boasts a personal best time of 3 hour 12 min for the marathon.

Bicarbonate supplementation: A strategy to stimulate mitochondrial adaptation to training?
adaptation ironmantraining mitochondria
Jan 14, 2021
Keep your metabolic health thriving during periods of over-indulgence
christmas ironmantraining metabolic health race weight
Dec 23, 2020
Pre-exercise nutrition: What do we know and how should we use it?
ironman long distance triathlon nutrition training
Nov 20, 2020
Close