Eating Before your Workout I Carbohydrate vs Protein vs Fasted 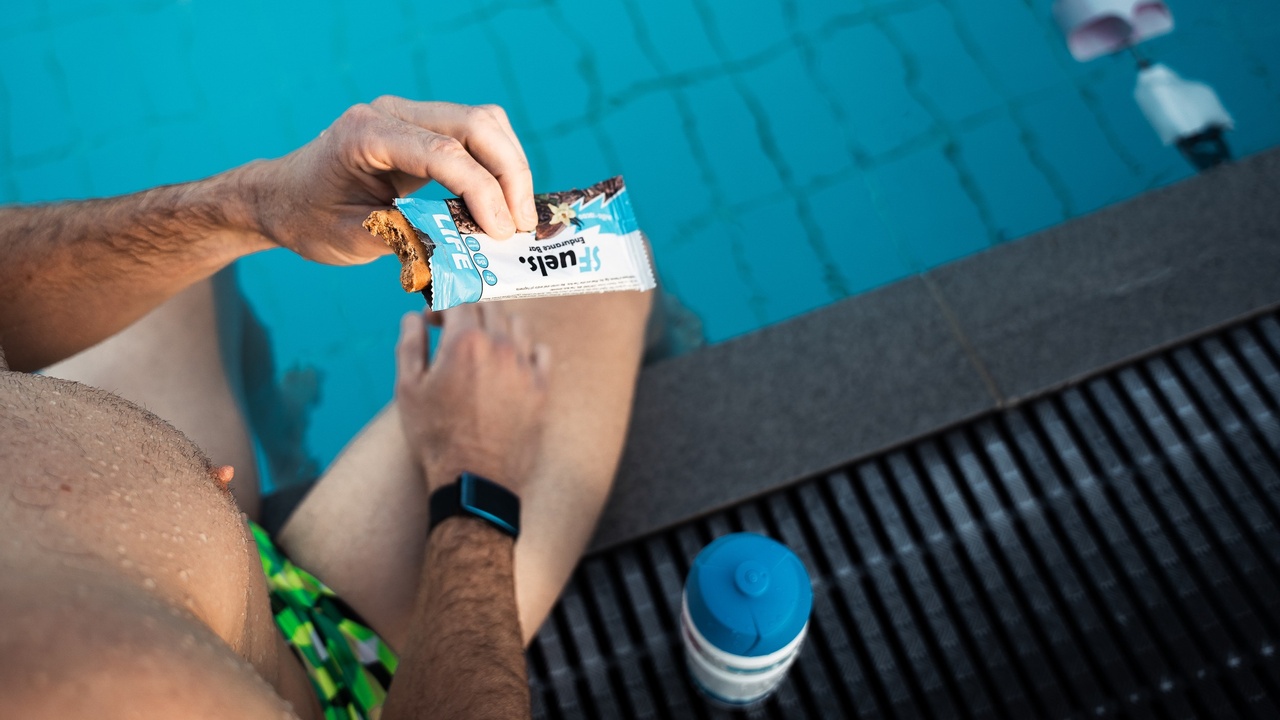 The question of “what should I eat before training”, is one that personally, I get asked a lot! Both by the athletes I coach, and by our Endure IQ education community (athletes and coaches). Up until now, I’ve always answered based on what I thought I knew, and what the literature pointed towards. However, to put it simply, the research just hasn’t been done in this space. That’s why I was super excited when I met my PhD student Jeff Rothschild nearly two years ago and learned this was the question he was eager to answer. I know what you’re thinking “this has surely been researched and already known?" Well, quite simply, it hasn’t, and certainly not in well-trained athletes.

As part of our quest to help figure out how we should be eating before exercise, I'm excited to share with you the findings from a new study from our lab that was just published, titled "Pre-Exercise Carbohydrate or Protein Ingestion Influences Substrate Oxidation but Not Performance or Hunger Compared with Cycling in the Fasted State". This is one of the first studies in Jeff’s PhD, and of course, there are many more questions to answer. We will certainly share some of our findings with our Endure IQ education community and Facebook Group as we find them. For those who are interested, you can watch Jeff and I go through the procedure for this study (with myself as the subject) via YouTube here. You can also download the full paper here.

Our previous study found many endurance athletes train in the overnight-fasted state, with a desire to increase fat burning and gut comfort as the primary reasons for doing so. At the same time, many other athletes avoid fasted training because they think their performance will suffer and/or they'll get too hungry.

To answer some questions surrounding this area, we had 17 well-trained cyclists (VO2max 62.2 mL·kg−1·min−1) perform a workout in the lab on three occasions:

The workout included 20 minutes of continuous cycling (4 x 5-min stages ranging from easy to somewhat hard, based around the ventilatory threshold), followed by 6 x 3-min intervals. The first three intervals were at a pre-determined wattage (80% peak power), and the last three were all-out efforts. The first 20 minutes of cycling was designed to test substrate oxidation, while the intervals were intended to simulate a typical workout and measure exercise capacity. 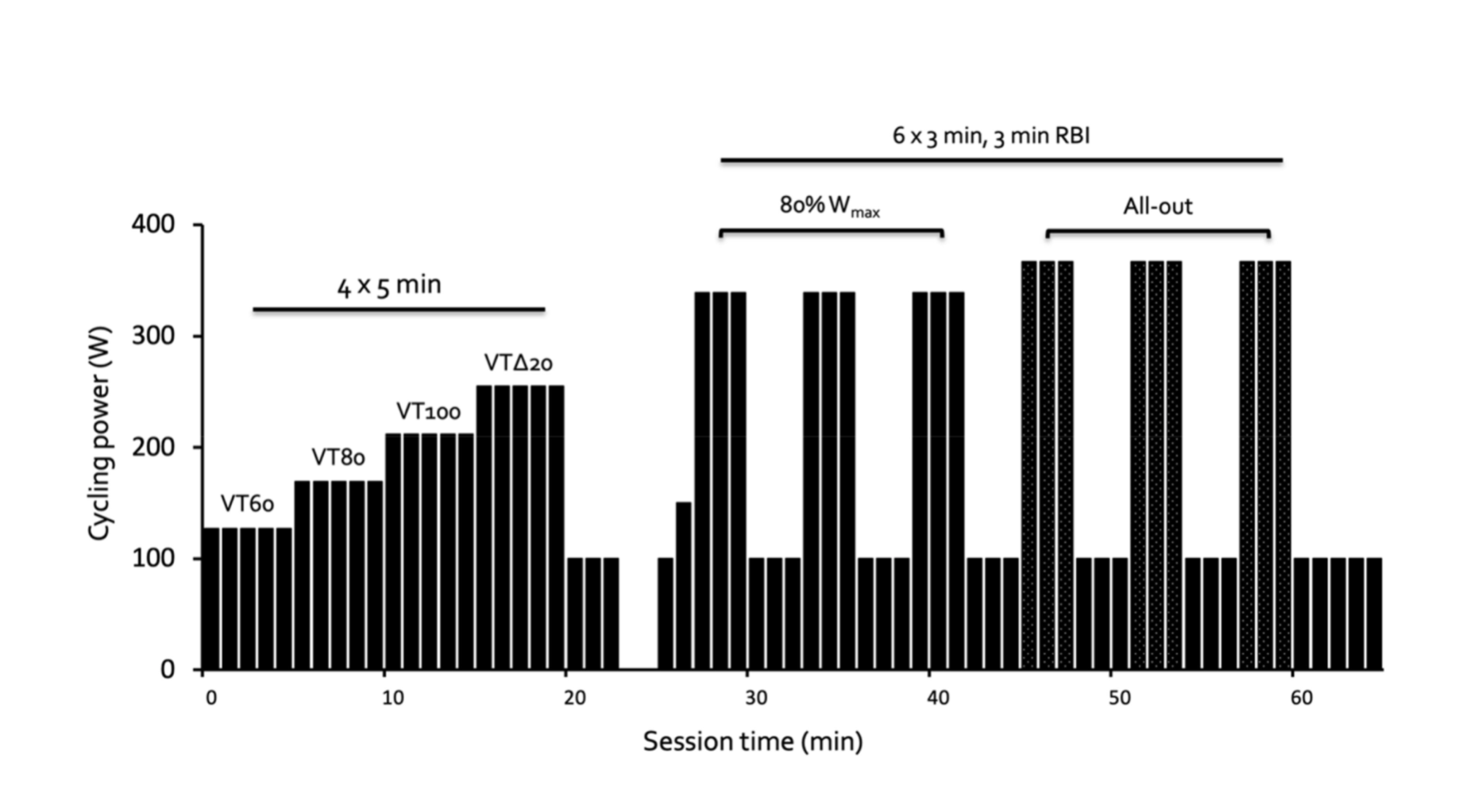 What did we find?

While it's been known for a long time that you will burn more fat when you are fasted compared with exercising after you've eaten, consuming a low-carb breakfast is also a good, and under-utilized option to burn more fat. You don't burn quite as much fat as when you're fasted, but it's still meaningfully higher than when you've eaten carbs. This figure shows fat and carb-burning (in grams per minute) with each of the three breakfast options...

As a measure of performance during an interval training session, we had participants go as hard as they could for the last three of the six intervals. Interestingly, there were no differences in power during the intervals!

The solid lines represent the group averages, while the dotted lines show each individual's average power during the final three, 3-min intervals. You can also see that this study included some very strong cyclists! 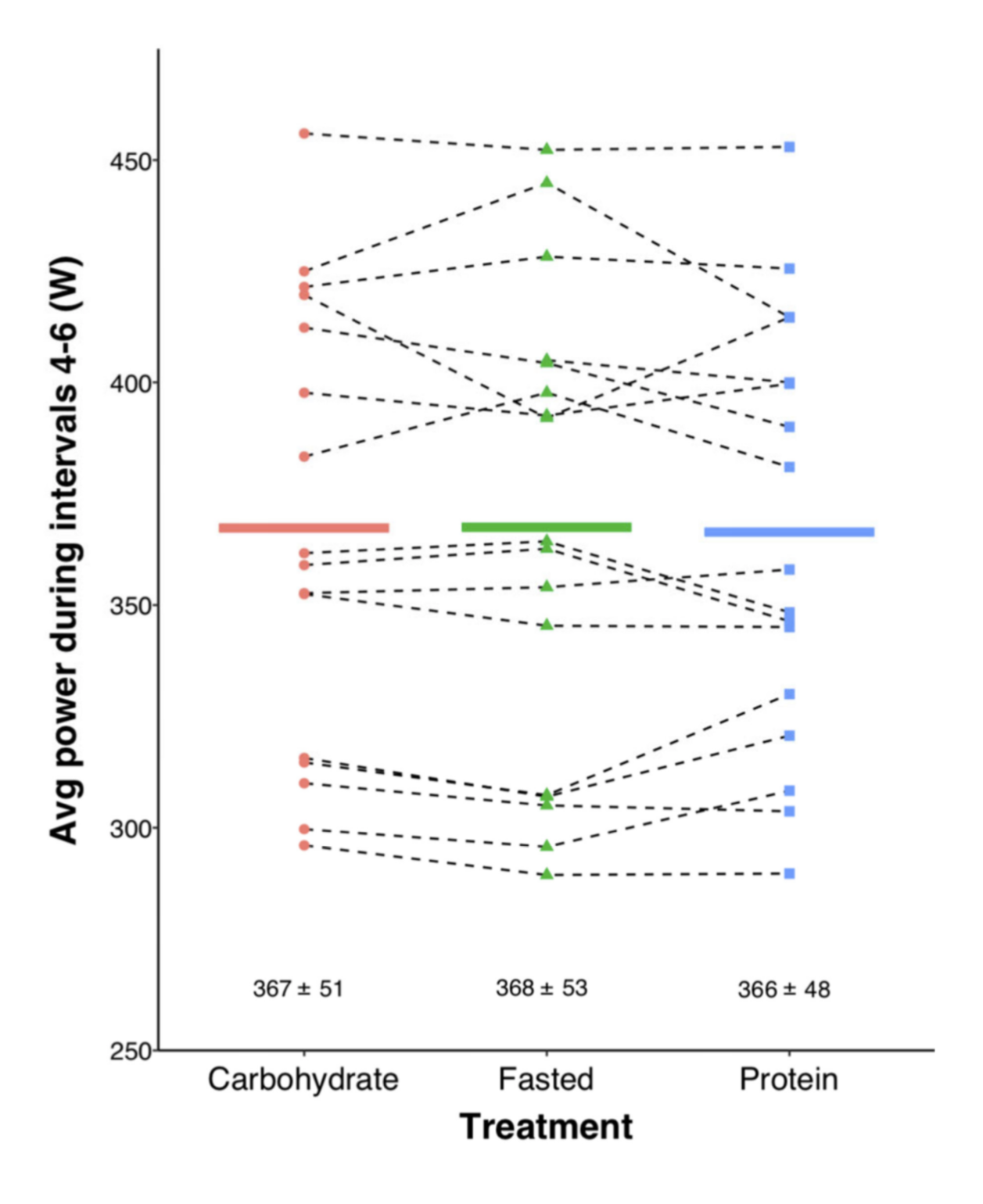 An important point is that the total workout duration was about 60 min. It's very possible that performance would indeed be different between treatments as the exercise duration extends beyond ~90 minutes.

Perhaps surprisingly, there were no differences in hunger at the end of the workout! Gut comfort was slightly worse in the protein group but considering the scale (0-100) it still wasn't bad for most people. VAS stands for Visual Analog Scale, which is something we use to allow people to make a mark on a piece of paper (100 mm long) to denote how they feel, with “not hungry at all”/ “no discomfort” and “extremely hungry”/ “extreme discomfort” placed 0 and 100 mm, respectively. 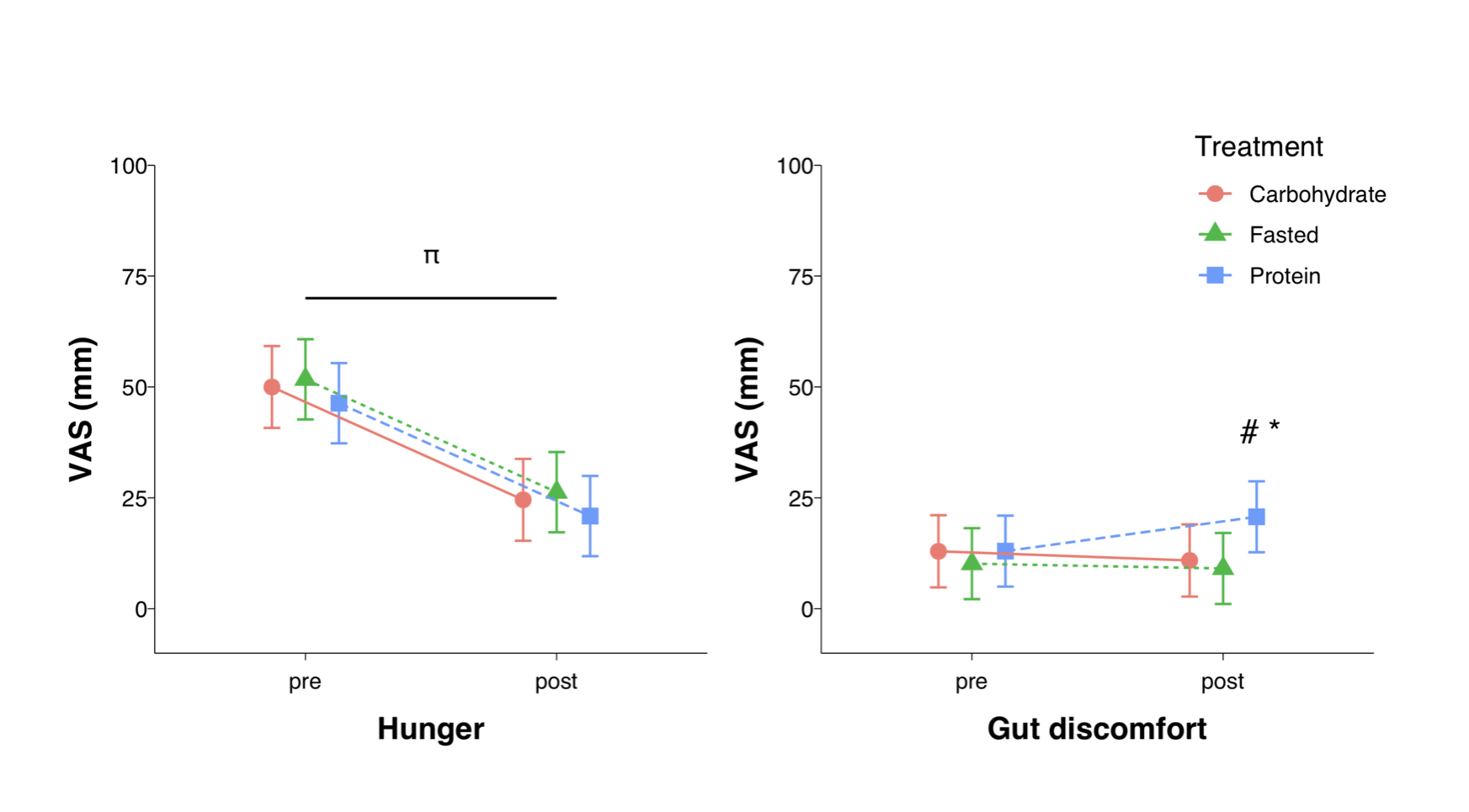 So, what does this mean for me?

To optimize fat burning, you can perform your workout fasted, or following protein/fat ingestion. One benefit of consuming protein is that it can help to avoid large energy deficits, something that can be a problem for people with a high training volume. As for performance, in the context of workouts lasting around an hour, your performance probably won’t be influenced by what you eat beforehand, so you can go with whatever feels best for you.

There is certainly more reported in the paper, so if you're curious you can download it here and read more.