How do I fuel my races with low carb healthy fat? - Fat Oxidation and Race Fuelling (Part 1) 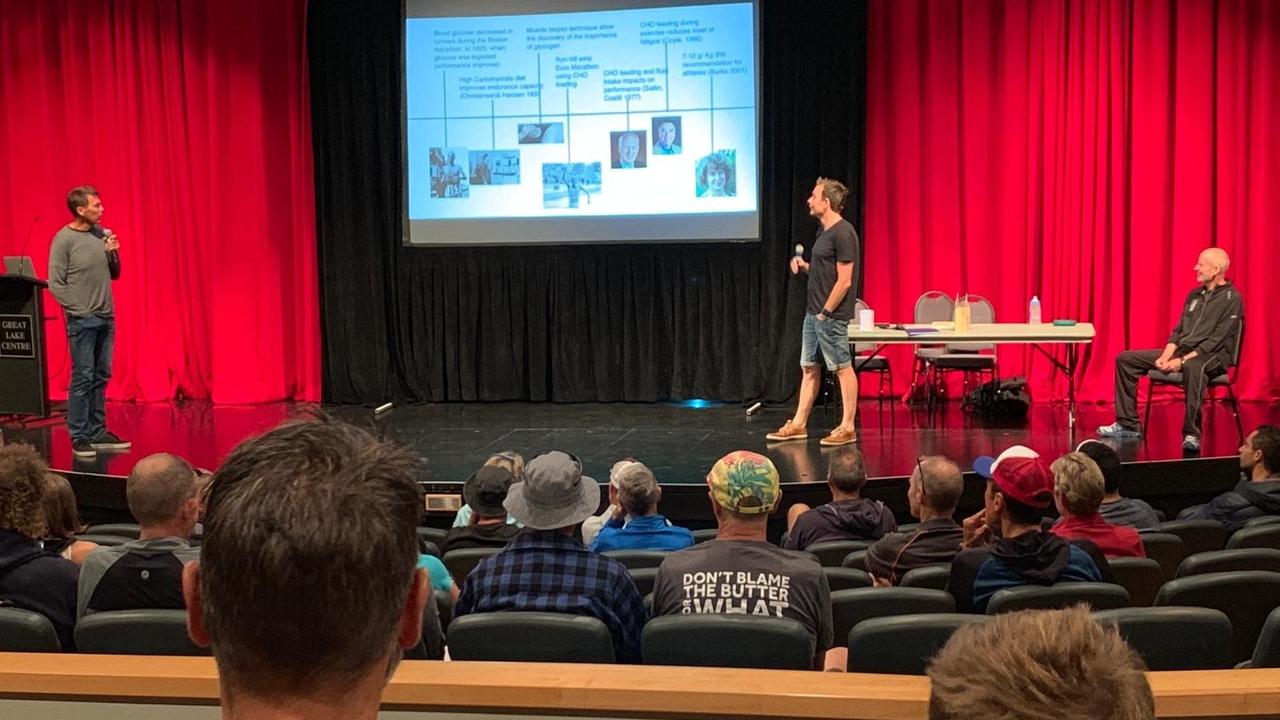 It’s Monday, and we’re fresh from some great racing at Ironman New Zealand. It was really great to be down watching some racing again (and yes, I did miss racing myself!).

While down at the event, Prof Grant Schofield and I were invited to present on the low carbohydrate healthy fat (LCHF) performance for Ironman.

The link to the presentation can be found in this closed Facebook group here (anyone can join), and we think it was quite well received with 50+ people attending.

However, as always around racing, one of the main questions we always receive is “how do I fuel my races with LCHF?”. Luckily, along with two of my endurance physiology colleagues at AUT, we discussed this very topic in a paper that used theoretical energy fuel requirements of Ironman triathletes at different performance levels (~8 h, ~9 h, and ~13 h).

This paper was published in the Journal of Sports Medicine, and I’ve tried to summarise below. The science is quite heavy so I will split this blog into two parts. This one with the background and the next one with more practical theory.

In the Sports Medicine paper, we tried to determine what the likely carbohydrate and fat requirements would be for Ironman triathletes completing the distance at an elite level (~8 h), at a very high-performing amateur level (~9 h), and at a lower-performing amateur level (~13 h). To do this, we first estimated the overall energy requirement of completing each of the three disciplines, assuming efficiency values typical for the three levels of athlete. As the elite model performance was swimming, cycling, and running faster than the amateurs, the rate of energy expenditure in each discipline was much higher. This is a characteristic feature of better athletes from a metabolic perspective – the ability to sustain higher rates of energy expenditure for long periods.

That’s the complicated part! What was most interesting was that, in all of our models, i.e. low and high rates of fat oxidation and across the performance spectrum, the estimated requirement for energy from carbohydrate sources was higher than what we have stored in our bodies as glycogen (anything from 788-1999 grams depending on the model). This confirms what anyone who has ever finished an Ironman already knew; we need to preserve our limited carbohydrate stores.

Carbohydrate Models during the Kona Ironman

In short, what our paper showed, was that for the very elite and top-level age-group athletes, even with very high levels of fat oxidation, it’s almost impossible to complete an Ironman distance race without taking in some form of carbohydrate. I have modelled this below (Figure 1 and 2) and showed at my fat oxidation rate (1.2 g/min, a consistently realistic "maximal" number is ~1.6 g/min). I wouldn’t have made it out of the Energy Lab had I not consumed some carbohydrates (I took 50 g per hour on the bike and 110 g for the entire marathon) 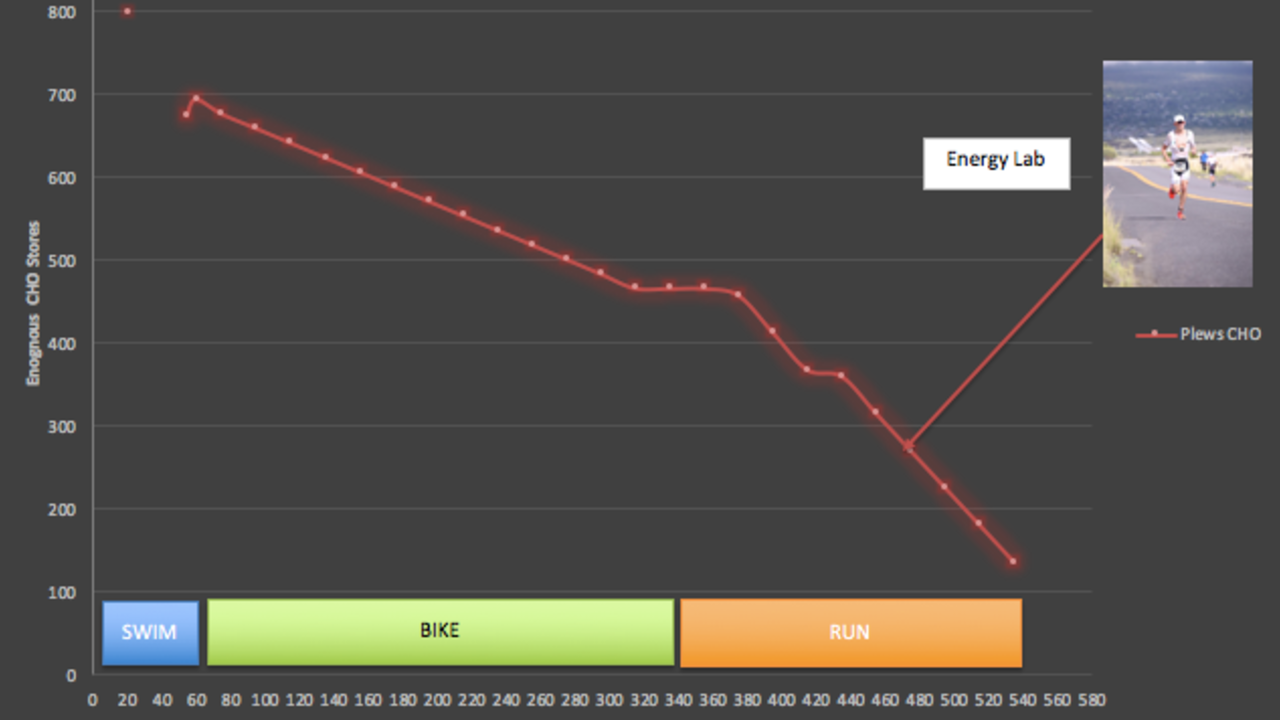 Figure 1: Modelled endogenous carbohydrate stores based on my substrate use at my actual intensity during the Kona Ironman. Note how the stores don't go below zero when taking carbohydrates during the race (50 g per hour on the bike, 110 g for the entire marathon) 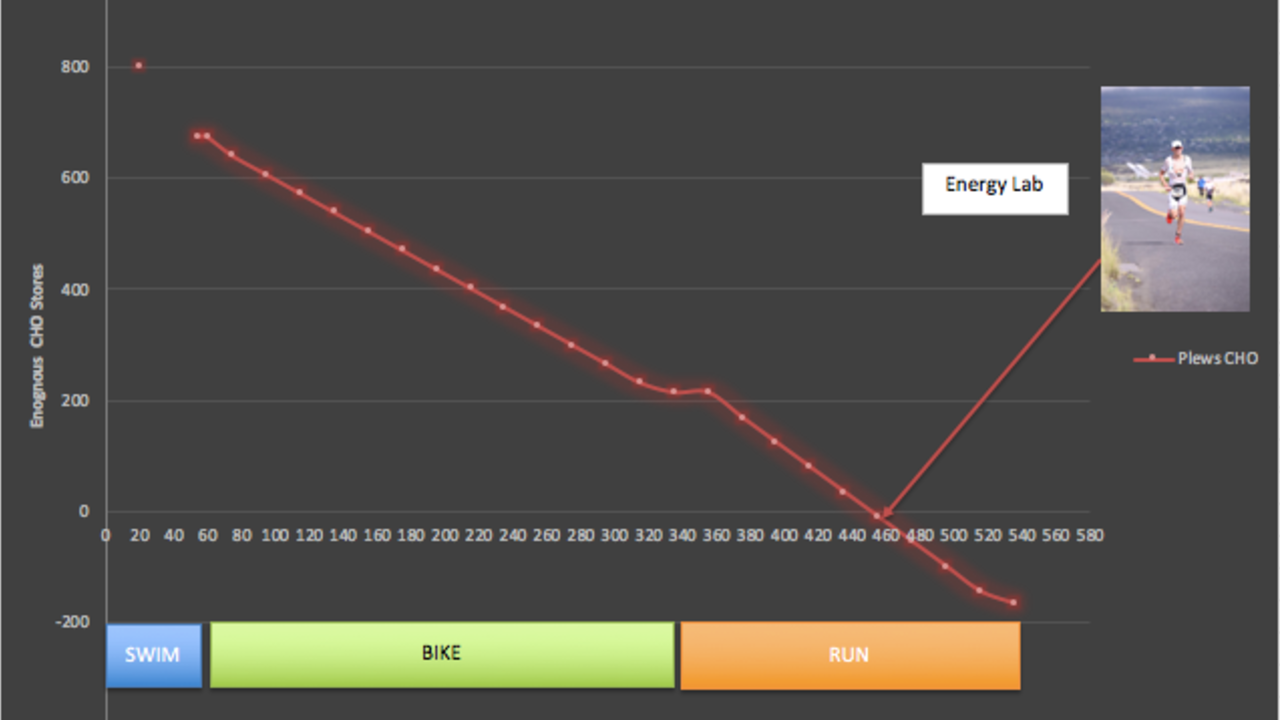 Figure 2: Modelled endogenous carbohydrate stores based on my substrate use at my actual intensity during the Kona Ironman. Note how the stores now go below zero had I not consumed carbohydrates during the race.

However, at the same time, had my fat oxidation not been high and substantially lower (<0.5 g.min, which is very typical for age-grouper and even pros) I would not have made it to the finish, no matter how much carbohydrate I consumed. Take Figure 3 and 4 below. This athlete who we tested in the lab had maximal fat oxidation of 0.3 g/min (exact same body weight and VO2max as me). Figure 3 shows him hitting the wall in the last 50 km of the bike at 60 g of carbohydrate per hour including the run), and Figure 4 shows him hitting the walls at the start of the marathon with 90 g of carbohydrate per hour. Bottom line is, unless he increases his fat oxidation, he will never make it! Moreover, consuming that much carbohydrate (60 plus grams per hour) can leave you with severe gastrointestinal distress. I have also done a video regarding the perils of very high carbohydrate consumption and fasted blood glucose levels and subsequent health here. 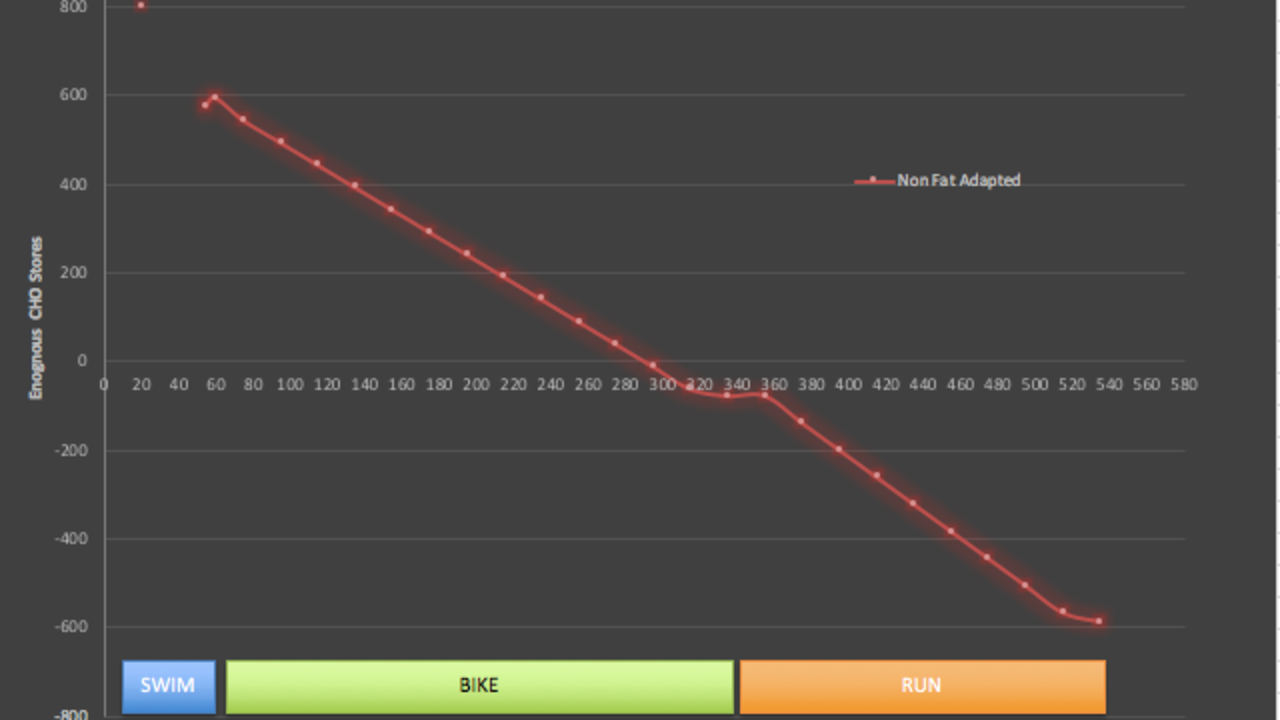 Figure 3: Modelled endogenous carbohydrate stores based on an athlete with a low maximal fat oxidation at my actual intensity during the Kona Ironman. Note how the stores go below zero even when taking carbohydrates 60 g of carbohydrate per hour during the entire race. 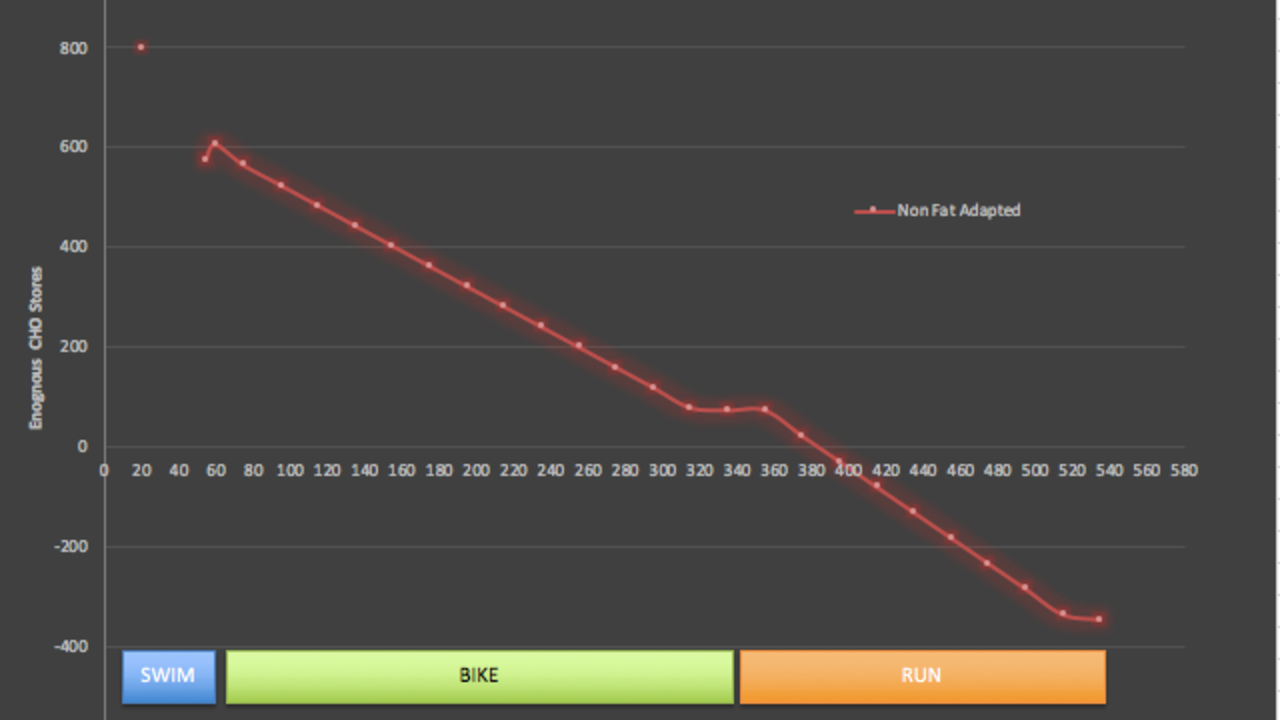 Figure 4: Modelled endogenous carbohydrate stores based on an athlete with a low maximal fat oxidation at my actual intensity during the Kona Ironman. Note how the stores go below zero even when taking carbohydrates 90 g of carbohydrate per hour during the entire race

What was unfortunate is that when our paper was published, it seems that this was the main message that was received; "Ironman triathletes at high-performance levels must ingest carbohydrate to meet their energy requirements, or risk bonking". Indeed, the paper showed that some carbohydrates are essential for the top age-grouper and elite athlete. However, throwing more carbohydrate into the mix isn't the answer; increasing your fat oxidation is! For a whole variety of reasons.

In the next blog, I will talk more about why increasing fat oxidation is both sensible and achievable.